Lady Flames stay at No. 1, solidify defense for next semester 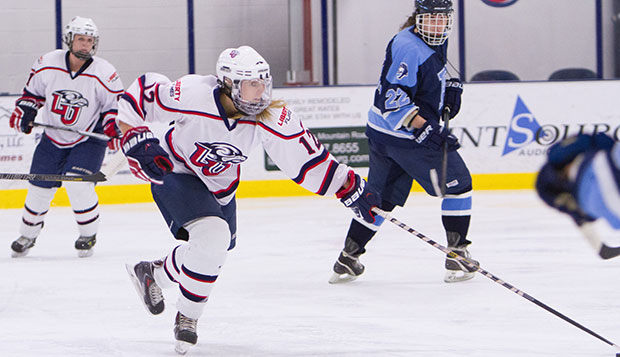 As a senior defenseman last year, Madi Fischer helped lead the Lady Flames to their first ACHA DI national title. After graduating this winter, she will return to the team for the spring semester as a graduate student, starting her fifth year of eligibility.

Liberty University's ACHA Division I women's hockey team remained at the No. 1 spot in the second of four ACHA DI polls and will have a bit deeper bench when it resumes play in mid-January.

The Lady Flames, who sport a slimmed-down roster of 14 players this season, will welcome back graduate defenseman Madi Fischer — who played a key role on last year's run to the ACHA DI national championship — and be joined by another defenseman, incoming transfer Kara Lee.

"Madi's a good steady player who will give us strength in the back and allow us to move (sophomore forward) C.J. (Tipping) back to attack," Liberty Head Coach Paul Bloomfield said. "C.J. is a good, assertive, aggressive player who's very versatile."

Lee grew up in Alaska but her military family has relocated to North Carolina and she will be fully enrolled at Liberty for the spring semester.

"It'll take her a bit to get used to the college game, but she's young and has lots of potential," Bloomfield said. "She has good size and it's just a matter of her finding her groove and working her in."

Senior Brittany Hymers will still be the anchor of Liberty's defensive corps.

"Brittany's our rock," Bloomfield said. "We need her back there and she does a great job. If she stays healthy, she's the ace of our defense."

The third ACHA poll is due out the night of Jan. 17, the same day the Lady Flames face No. 15 Penn State at the LaHaye Ice Center and two days after hosting No. 13 Colorado, Jan 14-15, in their first action in nearly two months.

"Because schools are playing and we're not, we may get bumped out (of the top spot in the next poll)," Bloomfield said. "The girls are ready to play. We're still practicing and we're going to keep them going over the Christmas break and bring back early to get ready for Colorado and Penn State."

"Our trip up to UMass will be important," Bloomfield said. "Every year, we end up going against UMass in the playoffs."