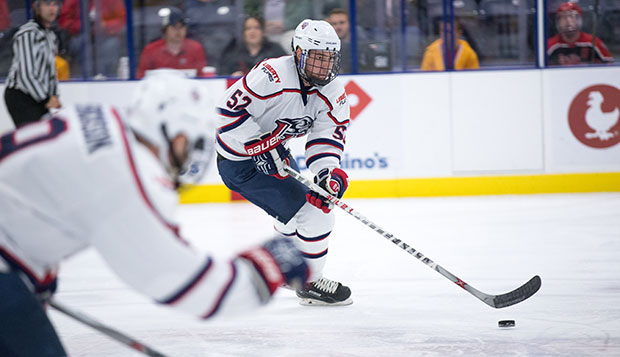 Freshman defenseman Zane Schartz will be back in action Friday night against Rutgers after missing most of November due to a concussion.

Traveling to Michigan for its third lengthy road trip of the season Nov. 19-21 turned out to be an excellent retreat for Liberty University's ACHA Division I men's hockey team, which swept Oakland to end a 1-8 skid that included seven losses on its home ice.

"We definitely felt like something special happened up in Michigan," Flames Head Coach Kirk Handy said, noting Liberty took more than 40 shots for the first time this season in both games against the Golden Grizzlies. "We played some good hockey up there and were really able to take a huge step forward."

In a battle between teams on the fringe of the ACHA DI rankings, which help determine the 20 ACHA DI National Championship qualifiers, the 20th-ranked Flames hope to gain some traction against No. 18 Rutgers, Friday and Saturday at 7 p.m. in the renovated LaHaye Ice Center.

"Rutgers has had a solid season and we're looking forward to playing them," Handy said of the Ice Knights, who Liberty last met more than five years ago. "It will be a key matchup for us and a series we're ready to play as we to continue to build on the momentum that we picked up in Michigan."

The Flames, who feature 10 freshmen, have started to see true progression from their newcomers and veterans alike, who have meshed well and adapted to new systems.

"There's been some great opportunities for those young guys and the encouraging thing for us is we've really seen them improve and mature in their games," Handy said.

Liberty's players will sport pink warm-up jerseys before Friday's opener in support of "Hockey Fights Cancer," a national drive to support the American Cancer Society. Following Saturday's game, Flames fans are invited to skate with the team from 10-11 p.m.

Liberty scouting report: While Flames freshman defenseman Zane Schartz returns from a concussion that kept him out for most of November, senior forward and alternate captain Bram Erickson will undergo ACL surgery on Thursday and be sidelined for the rest of the season after suffering the knee injury in the second game at Oakland on Nov. 21.

Besides Schartz, Handy anticipates more underclassmen will help ignite the attack, including freshman forward Owen Harris, who has complemented junior brother Chase Harris on the same line of late.

"Since we put those guys together, in six games they have accounted for seven goals and nine assists, 16 points, and they've been plus-4 as a line, so that's been a big key," Handy said, noting Logan has won 63 percent of his faceoffs during that stretch.

Ward, Garvin, and senior forwards Kyle Garcia and Tyson Street also made offensive impacts in Michigan while freshman Kyle Crane has stepped up his defensive game alongside graduate Pete Shantz.

Graduate goalie Cary Byron played all 185 minutes for the Flames in Michigan, as well as the shootout in the first-game win at Oakland, while junior Matt Pinel was out sick. Byron raised his record to 3-2-1 and his save percentage to 90.0 while lowering his goals-against average to 4.23. Pinel (2-5, 3.87 GAA, 88.7 SP) should be back in action again this weekend.

Rutgers scouting report: After struggling to a 4-22-1 record last season, the Ice Knights have have already doubled their win total in the first 14 games of their first season under Head Coach Martin Bernstein.

All-time series: Liberty is 2-0 against Rutgers after sweeping its only previous series with the Ice Knights in the 2009-10 season.

Coaches: Kirk Handy is in his 16th season as Liberty's head coach with an overall record of 339-149-20. Bernstein is in his first season at the helm for Rutgers and has the Ice Knights off to an 8-5-1 start.