Lady Flames to skate in collegiate division for first time 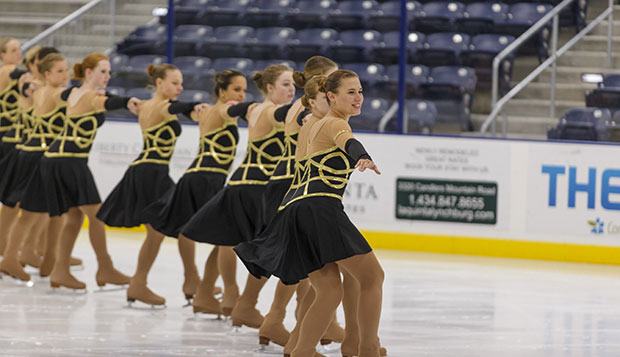 "The event is one of the most competitive synchronized competitions in the country," said Lady Flames Head Coach Tatiana Payne. "It's going to be a new experience for us, and the team is excited to compete at the collegiate level."

Liberty is scheduled to perform its 1920s Great Gatsby-themed routine Sunday at 3 p.m. It will be the last of 10 programs to skate in the second-to-last division, before masters and after intermediate and open, which it competed in previously. The group includes Adrian (Mich.) College, Delaware, Illinois, Maryland, Miami (Ohio), Michigan, Michigan State, Notre Dame, and Western Michigan. Five of those schools offer NCAA programs.

"It's a little nerve-wracking, but super exciting," said Lady Flames senior Caileigh Gallagher, one of three captains along with junior Rebekah Leahy and sophomore Brianna Gasterland. "It will be a good step for the team to get our feet wet with collegiate competition and to really get our name out there."

Performances will be scored based on the International Judging System (IJS), rather than on a 6.0 scale as used in the open division, where the Lady Flames will again be placed for the Jan. 30-31 Eastern Sectional Championships in Richmond, Va. They will receive two marks — one for technical score and one for program components.

"It will be interesting to see how we fare in a more technical scoring system," Payne said. "Our focus, with the wide range of skill levels we have, is to try to complete the elements to the highest degree of difficulty that our team is capable of doing while maintaining power and discipline."

On Saturday, the Lady Flames will see the 2015 ISU World Championship gold medal team from Canada skate along with other professional teams from the United States and Mexico, which could inspire them to perform at a higher level on Sunday.

Gasterland said the team has worked for more than three months to prepare for the collegiate competition since holding a choreography camp Aug. 21-23 in Charlottesville while renovations were being completed on the LaHaye Ice Center.

"It's a much more challenging program than the team has ever done before," she said. "We have some amazing freshmen, high-level skaters who are very experienced in synchro."

Payne has witnessed tremendous progress in practices throughout the fall.

"We're seeing big jumps in skill level, so it's been really encouraging," Payne said. "We have a very hard-working team with a level of camaraderie and teamwork we haven't seen in previous years. They have a lot of heart and are all very passionate about doing their best together."

The team will have a chance to perform its full four-minute program once more at the Dec. 13 PraiseFest at the LaHaye Ice Center before cutting it down to three minutes to enter the open division of the Jan. 16-17 Mid-America Synchronized Skating Championships in Fraser, Mich.