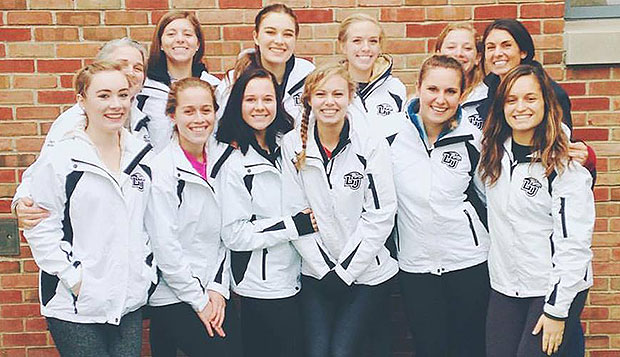 The eight members of Liberty University's figure skating team who competed set a school record for most points at Saturday's and Sunday's first of three Eastern Sectional Intercollegiate competitions of the 2015-16 season, hosted by Cornell University at its Lynah Ice Rink in Ithaca, N.Y.

The Lady Flames skated to an eighth-place team showing with 31.5 points, landing top-five finishes in every event they competed in and winning nine medals for top-three performances.

"It was an excellent weekend," Liberty first-year Head Coach Jamie Swyers said. "It was verification that we're doing what we need to do to keep moving forward. We've really raised the bar for our skaters, with more team coaches and off-ice training, and we've seen a lot of improvement."

She said the skaters who made the trip to New York were the ones who put in the time and effort, both on and off the ice."

Though team totals have yet to be posted on the United States Figure Skating Association (USFSA) collegiate website, Liberty led early and placed respectably in the 25-team competition.

"Katherine has beautiful extension and a lot of power in her dances, which really made her stand out," Swyers said, noting Gold is the second-highest level for dance.

When Liberty hosts the second Eastern Sectional competition, Feb. 26-27 at the LaHaye Ice Center, Thacker will dance to the Quickstep and later the Argentine Tango on March 12-13 at SUNY-Geneseo.

In Saturday's first event of the competition, Low Team Maneuvers, the Lady Flames' foursome of Harter, Gordon, Thacker, and freshman Megan Gonzalez placed third out of 14 teams in a strong showing of team unity.

"They represented Liberty really well and gave us positive momentum at the very start of the competition," Swyers said.

"I am very pleased with Cheyenne's collegiate debut," Swyers said, although she made technical errors in both programs. "She is a real powerhouse and has the ‘wow' factor out on the ice that I am excited about. She has the raw talent that we will continue to develop and polish and is sure to be a skater to watch out for this spring."

She said the weekend road trip was beneficial for team bonding.

"Figure Skating tends to be a very individual, ‘out for yourself' sport (but) in the collegiate competitive track there is a lot of team spirit and a real positive atmosphere," Swyers said. "Our team had the chance to support one another and celebrate each other's success."