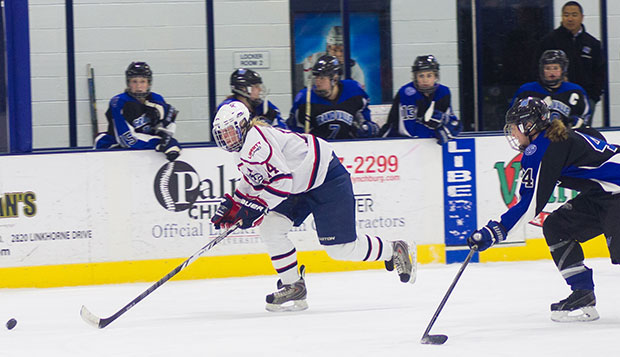 A day after needing overtime to overcome Grand Valley State, Liberty University's ACHA Division I women's hockey team, the defending national champion, solidified its No. 1 ranking with a 4-0 rout in Sunday's rematch with the sixth-ranked Lakers at Georgetown Ice Arena in Hudsonville, Mich.

"I'm glad we didn't have to go to the fourth period again," Lady Flames Head Coach Paul Bloomfield said after his team improved to 8-0 against ACHA competition and 8-1-1 overall.

"The shots were pretty level," Bloomfield said. "They give us a pretty good go for our money whenever we play them. They're pretty competitive. They didn't stop; they kept coming at us. We capitalized on our chances and it was a good way to end our road trip."

Sophomore forward Chelsey Greenwood, who scored two of the Lady Flames' three goals on Saturday, picked up right where she left off by netting Sunday's first goal just 30 seconds after the opening faceoff, putting away assists from graduate forward Nikki McCombe and freshman forward Lauren McDonald.

"McDonald went around the back of the net and put it to McCombe in the corner and she sent it to Greenfield for the finish in front," Bloomfield said.

The Lakers (7-5), whose five losses have come against the ACHA's No. 1 (Liberty), No. 2 (Miami of Ohio), and No. 3 (Adrian) ranked teams, allowed a second goal in the first period and one in the second and third.

With Grand Valley State on a power play, Liberty's leading scorer, senior forward and head captain Carrie Jickling, caught the Lakers off guard with a shorthanded breakaway for a 2-0 advantage with 8:10 left in the first.

"She was playing up high and intercepted a pass going across on the blue line," Bloomfield said. "She had the momentum and got ahead of their players on the breakaway. It was a pretty goal."

McDonald extended Liberty's lead to 3-0 with 49 seconds left in the second period when she followed her own shot on a breakaway and snuck the rebound past Lakers goalie Lauren Allen.

Finally, with 5:02 left in the third period, Lady Flames senior forward and alternate captain Catherine Burrell put the game out of reach by finishing assists from Jickling and freshman defenseman Kjristin Hoberg.

"We were in their offensive end and set up and Burrell put it right in the top corner," Bloomfield said. "That was a beautiful shot, from the hash mark, right by the catch hand of the goalie, who's 6-foot-1. There wasn't much space, but she found a hole the size of the puck in the corner."

Liberty, which hadn't played in nearly a month, will be off for another month and a half before hosting No. 14 Colorado on Jan. 14-15 and traveling to No. 15 Penn State on Jan. 17.