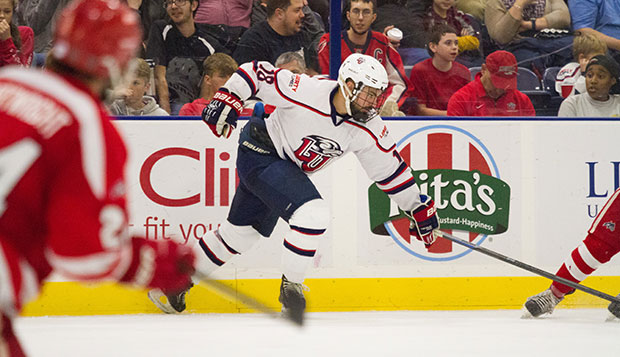 Liberty senior forward Kyle Garcia works along the boards in a recent game at the LaHaye Ice Center.

Junior forward Grant Garvin netted his team-high 10th and 11th goals on the season — the first on a power play and last shorthanded — to lift Liberty University's ACHA Division I men's hockey team to a 4-1 victory over Oakland, Saturday night at the Onyx Arena.

"Grant's been a solid contributor for us all year," Flames Head Coach Kirk Handy said. "We put him on the penalty kill four or five games ago and he's been great."

His line with sophomore forward Paul Lamoureux and junior forward Robert Ward accounted for three of Liberty's four goals on the night.

"It was really encouraging for us, a solid victory for our guys," Handy said. "They played really well. We had an excellent start and that made a big difference. We were able to score goals right from the get-go."

Two minutes after Garvin gave the Flames a 1-0 lead with the man advantage, freshman forward Owen Harris made it 2-0 with his second goal in as many games with 11:05 left in the first period.

"Owen Harris, Chase Harris, and Danny Logan have been our best line the last few games," Handy said. "Give our seniors a lot of credit for stepping up for us the last couple games. Danny Logan had a really solid game for us along with guys like Steve Bellew, Kyle Garcia, and Tyson Sreet."

Showcasing its speed and authority on attack, Liberty extended its lead to 3-0 on Lamoureux's fourth score on the season (tied for second on the team) off Garvin's fifth assist of the year.

After a scoreless second period, Oakland ended graduate goalie Cary Byron's bid for a shutout at the 17:38 mark of the third period. But the Flames went right back on attack and converted the game's final goal shorthanded with 15:55 left to play when freshman forward Zechariah Roberts assisted Garland's second goal on a two-on-one counterattack.

"That was a beautiful play," Handy said. "Zechariah made a great play to pass it over to Grant and he buried it in two-on-one. It was a key goal. They were down by two and on the power play."

Byron made 37 saves on the night in his third game in as many days, playing all 185 minutes and Friday's shootout in net.

"That's tough to do and he played a great game," Handy said, noting he took a hit and nearly had to come out in the third period. "He battled through it."

That could be said of the Flames as well, who lost seven of their eight games in the renovated LaHaye Ice Center, but won away from home for the fifth time in eight tries.

"The momentum from the games this weekend is exciting for us and we're going to build off of it," Handy said. "I really believe this weekend was a defining moment for our team.

"We played good, solid defense, led by guys like Pete Shantz, Kyle Miller, and Jackson Giammona," he added. "There were a lot of things we did well. We were very disciplined in our power play game, especially in the third period. All the guys in the locker room stepped up and played well."

The Flames are looking forward to their final four games of the semester — Dec. 4-5 against Rutgers and Dec. 11-12 against Indiana University of Pennsylvania.

"We're excited to come back home with confidence behind us," Handy said.