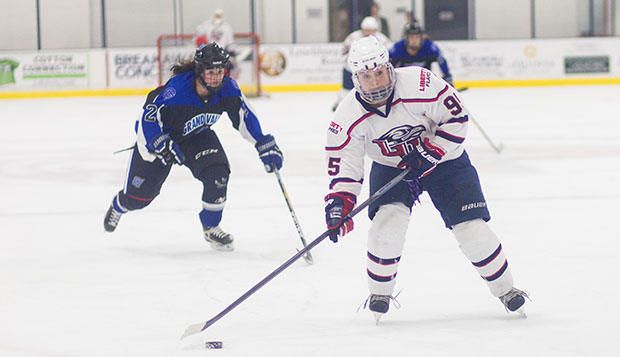 Sophomore forward Chelsey Greenwood tallied two of the biggest goals of her short Liberty University ACHA Division I women's hockey career — the equalizer and game-winner in overtime against sixth-ranked Grand Valley State — in a 3-2 triumph for the top-ranked Lady Flames (7-1-1), Saturday night at Georgetown Ice Arena in Hudsonville, Mich.

"It was a good, competitive game," Liberty Head Coach Paul Bloomfield said of Grand Valley State, a team Liberty defeated in pool play at last year's ACHA DI national championships. "They've got a ton of players on their bench and they're bigger in size as well as numbers this year. They're just a hard-working team. We were pretty evenly matched. It was a good game, competitive both ways. It was a little slow in the first period, but the girls kept working in the second period and played well."

Midway through the first period, sophomore forward CJ Tipping netted a power play goal off an assist from Greenwood, who passed the puck back to her in the corner where she finished the sharp-angled shot.

Grand Valley overcame a 1-0 first-period deficit on goals exactly a minute apart by Stacey Mathieu a split second before a penalty and by Corey Robison on the ensuing power play to take a 2-1 advantage into the intermission.

Liberty tied it at 2-2 just 1 minute, 30 seconds into the second period when Greenwood netted her first goal off an assist from freshman forward Lauren McDonald.

After nearly 40 minutes of scoreless play, Greenwood delivered again in sudden-death, just 1:24 into the five-minute overtime.

"We had a faceoff and there was traffic in front and a pass came from behind the net and she pounded it in from eight to 10 feet out," Bloomfield said. "We had opportunities to get more goals tonight, but we hit posts or the puck bounced the wrong way."

"Her defense played strong in front of her, but she played well," Bloomfield said. "She's young, and this was only her third game, but she's learning the ropes."

With the second ACHA Division I poll due to come out this weekend, the Lady Flames, who are 7-0 against ACHA competition, can solidify their No. 1 ranking with a win over the Lakers in Sunday's rematch at 3:30 p.m.

"This was a good win for us," Bloomfield said. "They've split with Miami and they're a decent team so this should help us with the rankings. If we take care of business (Sunday), we'll probably stay at No. 1. We've got the cleanest win-loss record."