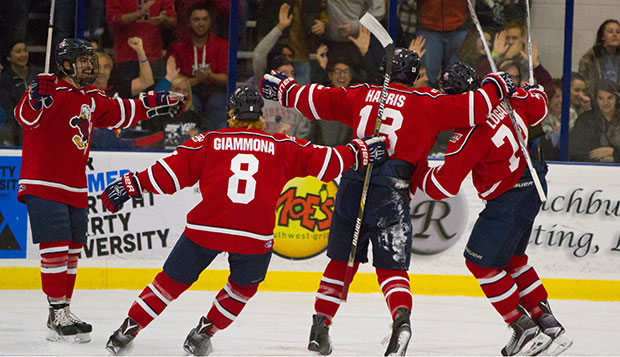 Freshman forward Owen Harris provided the breath of fresh air and fire Liberty University's ACHA Division I men's hockey team has been expecting out of one of its rookies in Friday night's 5-4 shootout victory over Oakland at the Onyx Ice Arena in Rochester, Mich.

Harris scored off a spectacular move to tie the game at 1-1 early in the second period before netting the first of the Flames' two scores in the shootout.

"Owen Harris had a really solid game for us tonight," Liberty Head Coach Kirk Handy said. "He's someone who really stepped up for sure. In the shootout, we got a fantastic move by Owen Harris to score one and another from (junior forward) Robert Ward to win it for us."

In regulation, Liberty's second, third, and fourth goals came off the sticks of three seniors who had been shut out through the season's first 14 games — defenseman Steven Bellew and forwards Tyson Street and Kyle Garcia.

Harris, the younger brother of junior defenseman Chase Harris, started the scoring for the Flames, chasing down an outlet pass from Bellew before faking out Oakland's goalie and finishing the breakaway opportunity.

Five minutes after the Golden Grizzlies (4-9-1) seized a 2-1 lead, Bellew answered unassisted by rocketing a slap shot into the back of the net with three minutes left in the second period.

Then, just three minutes into the third, Street received passes from freshman forward Zechariah Roberts and Bellew and showcased his stick skills with a sensational move and finish to give the Flames their first lead at 3-2.

Garcia appeared to put the game away by jamming in the rebound of shots by senior defenseman and head captain Ben Hughes off a secondary assist from Street for a 4-2 lead before Oakland rallied to tie the game with two goals in the final nine minutes.

"I was proud of the guys' resiliency, when they did come back," Handy said. "For the rest of the third period and in overtime — when both teams were chipping away, but nothing seemed to fall — our guys pushed back."

Liberty outshot the Golden Grizzlies 45-32 for the game, marking the first time this season it has put more than 40 pucks on goal.

"In the second period, we played really well and outshot them, 17-4," Handy said. "We executed really well and had solid discipline. From our perspective, it was a good opportunity for us to take another step forward."

Graduate goalie Cary Byron made 30 saves including both of Oakland's chances in the shootout.

"Cary was lights out in the shootout," Handy said. "It was good to get a win like that, and now, we've got to be ready to go again," in Saturday's rematch at 8 p.m., which will again be streamed live on Oakland's website.