Lady Flames warm back up with 8-1 victory over Davenport 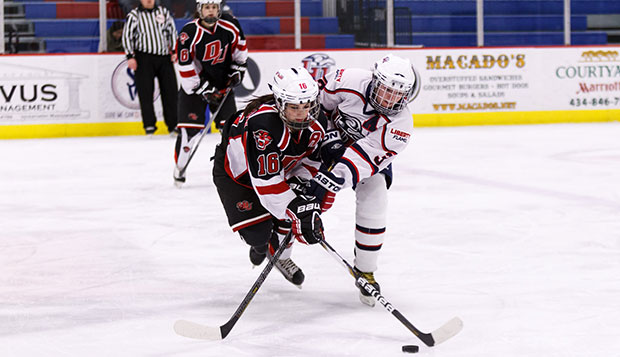 In its first game in nearly a month, Liberty University's ACHA Division I women's hockey team benefited from a five-point game from senior forward and head captain Carrie Jickling in an 8-1 win over Davenport, Friday night at the Patterson Ice Center in Grand Rapids, Mich., where the Flames' ACHA DI men's team played the night before.

After being humbled by a season-opening loss and tie against the Washington Pride U19 travel team, the defending ACHA DI national champion Lady Flames (6-1-1), who debuted at No. 1 in last month's first computer ranking, improved to 6-0 with three shutouts in league play. That included 7-0 and 8-0 shutouts of Vermont in Liberty' first two games in the renovated LaHaye Ice Center.

The Lady Panthers (3-9, ranked 12th) are only in their third season as an ACHA DI program and, after winning three of their first four games, have now dropped eight in a row.

Liberty may not have been at the top of its game, coming off a four-week layoff and a 12-hour bus ride, but it outshot Davenport in every period and 40-22 for the game.

"It was good to get that game out of the way because we really played down," Lady Flames Head Coach Paul Bloomfield said. "You could tell the girls hadn't played for a while. It's a good start after being off for a month, to get the wheels going again and get over the bus legs. Now that we're here, we've got business to tend to and we're going to have to play much better hockey (Saturday) night or we're not going to win because Grand Valley State is a much better team."

Against Davenport, the Lady Flames needed less than 90 seconds to net their first goal, scored by junior forward Courtney Gilmour off assists from Jickling and senior forward and alternate captain Catherine Burrell. Then, just 1:13 into the second period, Burrell extended Liberty's lead to 2-0 by putting away a pass from Jickling.

Two and a half minutes later, Gilmour netted her second score by finishing feeds from Burrell and sophomore forward C.J. Tipping. Two Liberty freshmen connected on the fourth score when forward Lauren McDonald converted off a pass from defenseman Kjristin Hoberg with 12:46 left in the second. Five minutes later, Jickling scored her first goal, capitalizing on a power play off an assist from Tipping to push the Lady Flames' advantage to 5-0.

The Panthers finally got on the scoreboard early in the third period before Hoberg scored off an assist from graduate forward Nikki McCombe with just over six minutes left in regulation. Jickling capped the scoring and her hat trick with the game's final two goals, the first off an assist from senior defenseman Brittany Hymers and the last unassisted on another power play in the final two minutes.