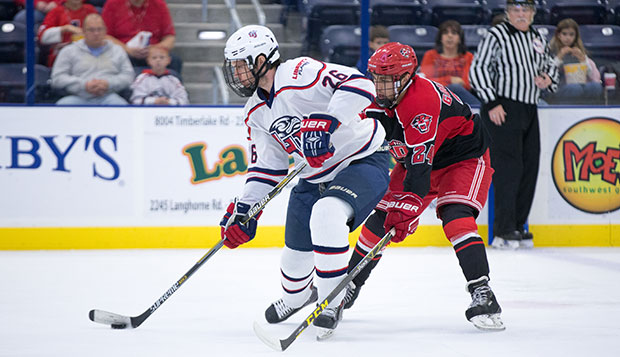 Liberty University's ACHA Division I men's hockey team let a one-goal lead slip away in the final eight minutes of a 5-3 setback, Thursday night against Davenport at the Patterson Ice Center in Grand Rapids, Mich.

After a scoreless second period, the Panthers took control in the third, outshooting the Flames 14-1 in the opening 13 minutes and seizing a 4-3 lead with two goals in a span of 36 seconds. Davenport (11-2-1, ranked ninth in this week's ACHA DI poll) added an empty-netter in the closing 20 seconds to complete a sweep of Liberty in the third and final game of the fourth-annual Blue & Gray Cup.

The Panthers clinched the series by taking two games from the Flames — 4-1 on Oct. 23 and 6-3 on Oct. 24 — spoiling the re-opening of the LaHaye Ice Center.

Liberty led 3-2 after the first period of Thursday's rematch, overcoming 1-0 and 2-1 deficits with goals on its first two power plays.

"It's another game we battled for," Liberty Head Coach Kirk Handy said. "We just need to find a little bit extra" to figure out how to put teams away."

Freshman forward Alyx Fonseca put Davenport up 2-1 before Liberty junior defenseman Chase Harris retied it at 2-2 by launching a shot from the slot through traffic in front of the cage that screened Kaludis. The Flames then capitalized on their second power play late in the period when senior forward Danny Logan controlled a loose puck in front of the net and snuck it past Kaludis to lift Liberty to its only lead.

"Logan had a solid game tonight," Handy said. "He was one of our better guys on the ice."

Kody Polin netted the equalizer with 7:44 left in regulation by receiving assists from Flood and fellow junior forward Jordan Simmonds. Polin skated across the crease and beat Liberty goalie Cary Byron gloveside with a shot from deep in the left circle that whizzed past Byron's helmet from a tough angle.

Byron had opened the period by making a kick save off a faceoff and back-to-back high glove saves before diving to smother a loose puck on a rebound of consecutive point-blank shots by the Panthers.

"Cary made some big saves," Handy said of Byron, who finished with 33 stops.

Simmonds scored the game-winner on a spectacular shot as he slid through the left crease, finishing assists from senior forward Matt Ogden and junior defenseman Aaron Beally on a quick odd-man rush. Finally, after Liberty pulled Byron for the final minute and a half, Panthers junior forward Chris Eckler pounced on an errant outlet pass as the Flames attempted to clear the puck from their defensive zone for a steal and finish into an open net with 19.7 seconds to go.

Liberty, which outshot Davenport 19-18 through the first two periods, wound up trailing the Panthers 38-26 in the shot department for the game, due to a 20-7 deficit in the third.

"They brought some pressure early in the third period and we didn't have any shifts that were pushing them back," Handy said. "Until that point, we played a solid game. They had a good stretch of time there where we needed a few more shifts that would push them back and retake control of the game. We'd like to see some of the younger guys, some of the freshmen step up."

"We're going to have to hit the reset button and go out tomorrow and start anew," Handy said. "I have full confidence in our guys."