Flames back on the road again for three games in Michigan 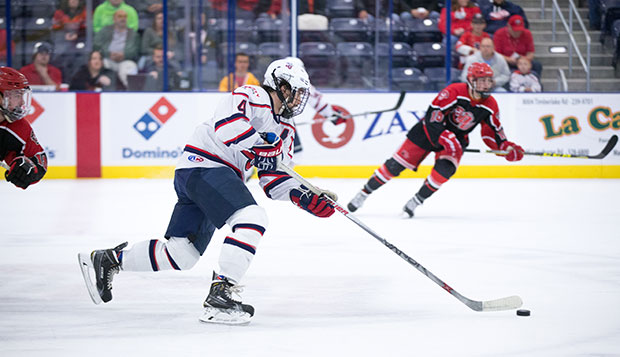 Flames senior defenseman Steven Bellew leads a counterattack against Davenport in the second game at the renovated LaHaye Ice Center on Oct. 24.

The euphoria from winning its first home game — in front of a capacity "Midnight Mayhem" crowd against Delaware early last Saturday at the LaHaye Ice Center — was short-lived for Liberty University's ACHA Division I men's hockey team as the Flames lost the rematch with the Blue Hens less than 20 hours later.

For the third week in a row, Liberty dropped three spots in this week's ACHA DI poll, to No. 21 after spitting the last two games of an eight-game homestand with Delaware, which moved up one spot to No. 18. The loss was the Flames' first against a team ranked outside of the top 10.

Now, Liberty will look to generate some much-needed momentum on the road as it travels to Michigan to take on ninth-ranked Davenport on Thursday night and unranked Oakland on Friday and Saturday nights.

By sweeping the Flames on Oct. 23-24, in their first series played in the renovated rink, Davenport has already clinched its third Blue & Gray Cup — a best-of-three Civil War-themed series started four seasons ago — heading into Thursday night's rematch with Liberty on its home ice, the Patterson Ice Center.

The Flames' rivalry with Oakland is nearly as long and at least as storied, starting with a matchup in the 2006 ACHA DII national championship game, won by the Golden Grizzlies in overtime, in both teams' last season competing at that level. Oakland went on to claim the ACHA DI national championship title the following season.

Junior goalie Matt Pinel has had the hottest hand of late, starting the last six games in a row between the pipes, though his numbers have fallen off a bit at 2-5 with a 3.87 goals-against average and an 88.7 save percentage. With Josh Halpenny redshirting his sophomore season, graduate Cary Byron (1-1-1, 5.52 GAA, 88.1 SP) is waiting in the wings and ready and willing to answer the call to duty this weekend, as needed.

Davenport scouting report: The Panthers, coming off a split at second-ranked Lindenwood, pounce on opponents with a volatile attack as they showed by jumping out to early leads and outscoring Liberty 10-4 in last month's sweep,, netting 62 goals so far this season while allowing only 36. Davenport features five players who scored 30 or more points last season, led by right winger Matt Ogden (8G, 8A) and left winger Travis White (8G, 7A). Its second-leading scorer this season is a rookie, Alex Hulford (4G, 5A). Its top scorer from last year, center Chris Eckler (13G, 33A in 2014-15; 3G, 6A this season) has gotten off to a slow start while forward Jordan Simmons (25G, 16A in 2014-15; 7G, 7A this year), has picked up the scoring pace and now ranks third.

The Panthers have two veteran goalies to choose from — Matt Kaludis, who boasts a 7-1 record with two shutouts, a 1.99 goals-against average, and 93.0 save percentage this season and is backed up by former Flames keeper Clayton Brown (3-1-1, 3.51 GAA, 84.8 SP).

Oakland scouting report: Similar to the Flames, who have been outscored 59-38 in ACHA games, the Golden Grizzlies have struggled offensively giving up 51 goals while netting only 35. They feature just one double-digit scorer, forward Joe Pizzimenti (2G, 8A), while forward Kyle Nelson (6G, 3A) and defenseman Ian Jacobs (4G, 5A) have each netted nine points.

All-time series: Liberty is now 18-20-1 against Davenport in a rivalry that dates back to the 2005 ACHA DII National Championships. It has conceded three of the four Blue & Gray Cup series to the Panthers, who swept the Flames to clinch this year's Cup at the Oct. 23-24 grand re-opening of the renovated LaHaye Ice Center. The Flames are 16-13-2 against Oakland after splitting home and away series against the Golden Grizzlies last season and sweeping all four matchups in the 2013-14 season.