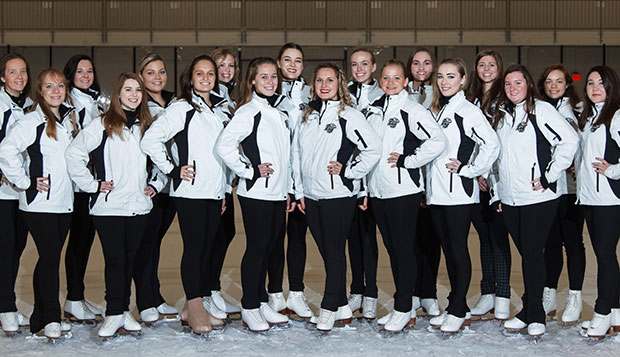 A few members of the most talented class of freshmen in the seven-year history of Liberty University's figure skating program will make their Lady Flames debuts along with a few polished veteran skaters at Saturday's and Sunday's Eastern Intercollegiate Sectional competition, hosted by Cornell University.

They will leave from Lynchburg on Friday morning for the event that starts at 8 a.m. both days at Cornell's Lynah Ice Rink, in Ithaca, N.Y.

"I'm looking forward to seeing how well we're able to do against the bigger schools and seeing the team come together," said Liberty senior preliminary skater Maria DeFosse, one of two captains along with junior Emily Hautbois. "It's always a good experience when we travel, that we're able to get closer to each other and then just the example that we're able to set, representing God and Liberty, no matter how well we do."

She has high expectations for her teammates, especially the newcomers.

"We have a really good group of freshmen in the sense that they're all dedicated and they're all just good, godly girls," DeFosse said. "It's been really exciting because we have a lot of girls coming in at higher levels, so it's going to allow us to be more competitive. We'll have people competing from preliminary to senior, so all the levels will be represented."

Liberty will bring nine skaters to Cornell, but only seven will be able to compete as two of its most promising skaters. Freshman Cami Burkhardt, who represented the Lady Flames at the United States Figure Skating Association (USFSA) Collegiate Championships in Pittsburgh in early August, is sidelined with a back injury and Hautbois has a knee injury.

"There'll be some really tough competition up there, so it will be really good for the freshmen to get the lay of the land in collegiate skating," said Liberty first-year Head Coach Jamie Swyers, who also serves as Liberty's associate director of fitness. "Our goal for the team for this event would be for them to be able to put out the quality of skating that they've been doing in training and have a better understanding of what the collegiate track will entail for them this year."

Liberty will travel to another sectional event at Delaware's Fred Rust Arena in late January before hosting the third and final competition Feb. 26-28 at the LaHaye Ice Center.

Before then, Liberty will host its annual PraiseFest, a collaborative effort between its figure skating and synchronized skating teams on Dec. 13. That is usually a spring event, right before Easter, but this year's show will be Christmas-themed.