Flames come out blazing at Class A opener in Georgia 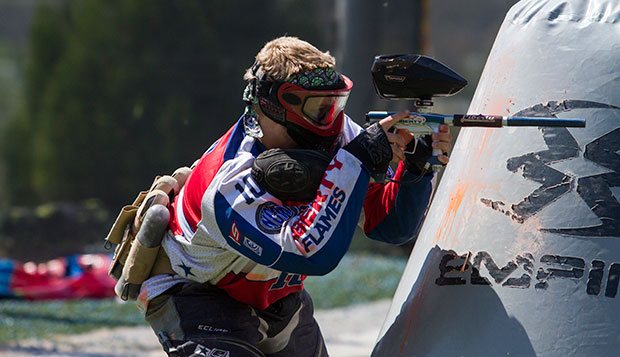 Liberty senior Kayne Boyer, one of six starters on the Flames' Gold line, competes at an event hosted by Liberty last spring.

After opening the day with a 5-1 triumph over the host Owls, the Flames rallied from 2-0 deficits twice to defeat North Carolina State, 4-3, and force East Carolina to overtime before falling by a 4-3 count in its final match of the day.

"We need to find a way to get out in the lead and not have to dig ourselves out of a hole," Liberty Head Coach Brian Davidson said. "Against Kennesaw State, we definitely came out hot, playing well from the start. Our starters were on fire and we won our first point right away and kept things going. I was able to sub in our second line guys and they performed well as well."

"Lewers played really well the second half on the Dorito side when others weren't," Davidson said.

In the match against NC State, the Flames came out flat, expecting to run over the Wolfpack, which wasn't as strong as KSU in Davidson's estimation.

"We got ahead of ourselves and lost the first two points right away," he said. "At the end of the first half, the score was 1-3, so going into the second half, we had to figure out what was going on, come up with a new game plan, and we were able to score three unanswered points."

The ECU match followed a similar script, until the Pirates captured the flag in the sudden-death overtime period.

"We knew ECU was definitely the best team there, and started out on our heels, dropping the first two points again and struggling to pull out ahead," Davidson said. "All our points against them were long, drawn-out points. Both teams played well, and they didn't play as sloppy as the other teams, so that made it harder to capitalize."

The Flames managed to draw even at 3-3 before the end of regulation before Davidson said ECU's strategy allowed it to prevail in overtime.

Davidson said Chiaverini was Liberty's most consistent player, listening to the coaches and playing solid throughout the three matches.

The Flames have four and a half months to prepare for their next Class A tournament, a two-day event that they will host at the Liberty Paintball Fields on April 2-3, when the same four teams will square off in a round-robin format each day for a total of six matches instead of three.