Lady Flames win first before being swept by No. 1 Blue Hens 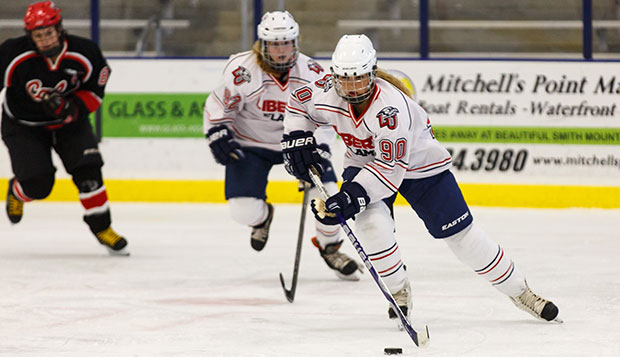 Liberty University's ACHA Division II women's hockey team experienced its first taste of victory on Friday at Montclair State (N.J.), a second-year program ranked ninth in the East Region. The 11th-ranked Lady Flames started a three-game road trip with a 6-4 triumph before losing twice at top-ranked Delaware 9-0 on Saturday and 8-0 on Sunday.

Last Nov. 8-9, Liberty swept the Red Hawks at the LaHaye Ice Center to end a losing streak that spanned three seasons. Friday's win was the Lady Flames' first in five tries this season and snapped a 13-game skid that dated back to last year's meetings with Montclair.

"It was a very back and forth game and they were very physical," Lady Flames Head Coach Sara Niemi said. "Everyone controlled the puck well and showed a lot of confidence in the offensive end. We had a lot of girls contribute on the scoreboard which is encouraging for everyone. They played well as a team and fought through Montclair's physical play."

The Red Hawks scored first, just five minutes after the opening faceoff, before Liberty tied it up a minute later on a goal by junior defenseman Alyssa Davis off assists from senior center Olivia Marshall and sophomore forward Faith Gerber. Montclair reclaimed the lead before the Lady Flames again responded to tie the contest in the following minute, on a goal by senior center Meghan Nawyn assisted by senior forward Crystal Price. Then, with three minutes remaining in the first period, Liberty seized a 3-2 lead on what stood up as the game-winning goal by Marshall, who finished a feed from sophomore forward Karis Hicks.

The Lady Flames struck again just three and a half minute into the second period when Gerber converted an assist from Nawyn into a 4-2 lead before the Red Hawks trimmed it to 4-3 with three minutes to go.

"Entering the third period, the girls knew they needed to control the puck more in Montclair's zone, but also back check harder to prevent Montclair from scoring," Niemi said.

Four minutes into the final stanza, Davis gave Liberty some breathing room off an assist from Nawyn before Marshall pushed the lead to 6-3. Montclair scored with 36 seconds left for the final score.

At Delaware, the Lady Flames switched up from a man-to-man to a zone defense, but the Blue Hens used their speed on the Olympic-sized ice at Rust Arena to net 17 goals in the two games.

"We adapted well to the zone defense which helped us cover the middle of the ice and block a lot of shots," Niemi said, noting Thomas faced a total of 80 shots in the two games and over 125 shots for the weekend.

The Lady Flames' six losses this season have been decisive, by a total margin of 64-2, but Liberty has faced the No. 1, 2, and 3-ranked teams in the East — Delaware, Cal-Penn, and Buffalo, respectively.

After Thanksgiving break, Liberty will host Rowan, which is tied with the Lady Flames at No. 11, Dec. 12-13 at the LaHaye Ice Center. The Lady Profs swept Liberty in two competitive contests, 3-1 and 3-2, last Jan. 24-25 in New Jersey.