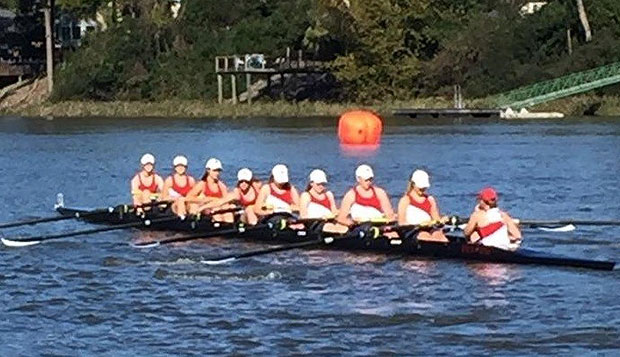 The Lady Flames' varsity eight boat heads out on the water for the start of Saturday's race.

Spectacular rowing conditions on the Savannah River made for some fast races at Saturday's fall season-ending Head of the South regatta in Augusta, Ga., where Liberty University's women's crew team was one of 67 club-level programs competing.

"It was a great day for rowing," Lady Flames Head Coach Debbie Prowse said. "It was beautiful, with low temperatures in the 60s. There was a pretty swift current, but we rowed with the current, and a little bit of a headwind, but nothing major like last time (at the Head of the Occoquan)."

The layout of the racecourse was much easier to navigate for the 600 boats entered in races throughout the day.

""It was a pretty straightforward course for the coxswain, with not a lot of turns in it," Prowse said, noting that eliminated the likelihood of collisions. "It went under four bridges which they could use as landmarks to communicate to the rowers how far they had to go."

Competing in the same race, Liberty's women's varsity four A boat, led by sophomore coxswain Lydia Miller, placed 12th in 18 minutes, 51.6 seconds while its B boat, coxed by senior Trevor Ellingson, came in 23rd out of 24 boats in 20:32.8.

"We broke 19 minutes, so that was good," Prowse said. "For a head race, that was a good time. We were happy with that, and the fact that we beat boats from William & Mary, Georgia, Samford, Tampa, Richmond, Davidson, Georgia Tech, John Carroll, College of Charleston, American, and Wake Forest."

On the B squad, Ellingson spurred on freshman Moriah List, sophomore Sarah Catto, junior Caitlyn Parr, and sophomore bow Marybeth Klein to finish more than a minute ahead of Wake Forest's B boat.

Liberty's women's varsity eight boat, also coxed by Miller, finished ninth out of 10 entries in its 5,000-meter race in 17:38.5. Miller exhorted Dowdy, Lopp, Coughlan, List, Catto, Parr, sophomore Chloe Fisher, and Williams to press on to the finish line just 10 seconds in front of the College of Charleston.

"In the eight race, the spread of time was less than a minute between the first- and ninth-place boats," Prowse said, noting Emory's winning boat crossed the line in 16:43.6. "It was pretty competitive, pretty fast and a short spread of time for a 5,000-meter race."

The Lady Flames will start winter training on Wednesday, but will be off the water from now until the spring. Most of their workouts will be done on indoor ergometers, while rowers will also continue weight training under Club Sports strength and conditioning coach Chris Kerr as well as incorporating cross-training workouts on stationary bicycles and swimming in the LaHaye Student Union pool.

"We'll be continuing to improve our technique and building up our aerobic base and our strength so we can be faster in the spring," said Prowse, who will enter Liberty's first novice men's and women's boats in competitive regattas next semester. "I'm excited about our novice team right now. We keep getting additions and they're very excited, enthusiastic about rowing. Our main focus in the spring is getting those novice boats as fast as we can get them. They'll be ready to race in late march." 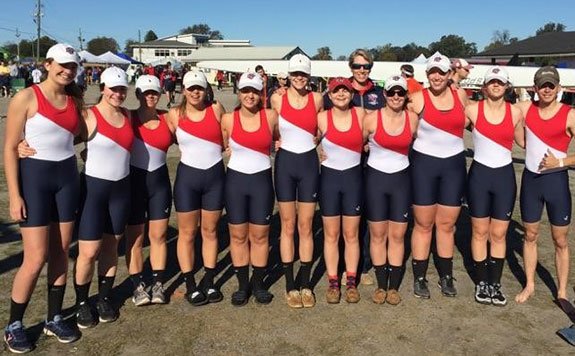