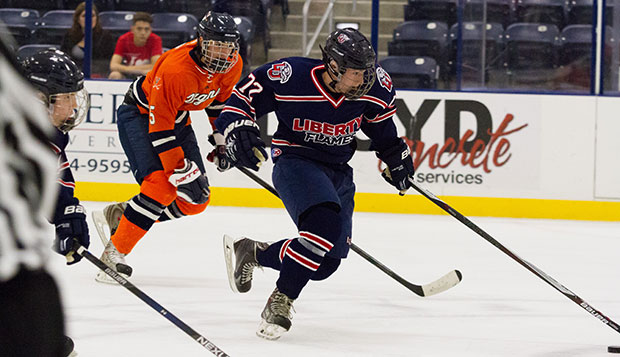 Freshman forward Kyle Jassman leads a Liberty fast break in an 8-4 loss to Virginia on Nov. 6 at the LaHaye Ice Center.

Triumphs have been hard to come by for Liberty University's ACHA Division III men's hockey team this fall, so Sunday afternoon's 4-3 victory over rival Coastal Carolina at the LaHaye Ice Center was worth celebrating.

"It was a good win for us," Flames Head Coach Rett McGibbon said. "Going back to our second game against Southern Connecticut (a 4-3 overtime conquest on Oct. 25), we started playing our kind of hockey, buying into what we wanted to do."

Last season, the Flames swept the Chanticleers by 11-4 and 9-3 scores at LaHaye, snapping a five-game losing skid.

"They've gotten a lot better," McGibbon said. "Coming into this game, Coastal was ranked 12th in the South Region, so if we want to have any hope of being regionally ranked, we needed this game."

Sunday's game against the Chanticleers (6-7-1) was plagued by penalties — 16 assessed against Liberty and 12 against Coastal — but the Flames were opportunistic, scoring all four of their goals on power plays.

"They scored two of their three goals on the power play — one in the second and one in the third on a five-on-three," McGibbon said. "In five-on-five hockey, we were dominating them."

"In five-on-five play, we did a really solid job of using our cycle game, which is what we've been preaching all year," McGibbon said. "Veterans to rookies are buying into the system and getting pucks in deep, and when we get in position down low, as a team, we can be difficult to stop. If we dump the puck in and use our speed to chase it, other teams have trouble containing, and we can create some high-percentage scoring chances."

McGibbon said, even though he did not score, freshman forward Kyle Jassman was especially effective on attack.

"Every time he touched the puck, he was dangerous," he said. "He controlled the puck, had some nice passes, and created scoring opportunities for himself and others. That was probably his best game of the year so far."

This weekend, Liberty hosts VCU at LaHaye, where the puck drops Saturday at 6 p.m. and Sunday at 10 a.m.