After posting first win at FGCU, Flames blanked in rematch 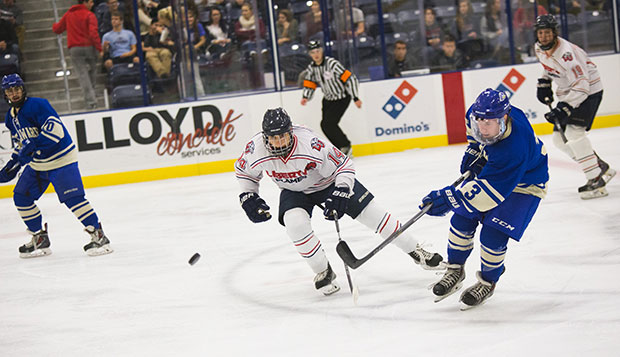 Flames senior forward and head captain Paul Ingles pursues the puck in a recent contest at the LaHaye Ice Center.

The Flames, who debuted at No. 1 in the first Southeast Region poll, ahead of the second-ranked Eagles, staged their first victory at FGCU on Friday night, winning 3-1 to snap a six-game losing skid at Germain Arena, before suffering their first setback of the season in Saturday night's rematch, losing by a 7-0 count.

"It was a tale of two games, like night and day," Liberty Head Coach Chris Lowes said. "Bounces went our way last night, their way today. We played extremely well last night; today, we struggled and got down early and it was an impossible task to recover from."

"They're a very good team and they showed that they have no mercy," Lowes said. "When they have a chance to finish a game, they do. They showed that killer instinct today. They're a veteran team, a very skilled team that made the most of their chances."

On Friday night, the Flames followed a script that has gotten them out to the best start in program history.

"We minimized the areas that make Florida Gulf Coast so strong and accentuated our strengths throughout the game," Lowes said. "We worked hard for our chances and scored all of our goals five-on-five. We were at the short end of power plays — they had six and we only had one — but we were perfect on the penalty kill."

Liberty scored just 25 seconds after the opening faceoff when junior forward Devon Docksteader put away assists from linemates Paul Ingles and Ben Freymond, who skated wide and sent a centering pass to Docksteader in front of the net.

"We played with a confidence we've had all year, but it was a confidence combined with execution that we haven't had all year," Lowes said. "(Freshman goalie) Blake Scott played very well and made some big saves to protect our lead, especially when we were killing penalties. From top to bottom, from our forwards to our defense to our goalie, we played some of our best hockey of the year."

FGCU tied it at 1-1 by capitalizing on a bad bounce with 9:00 left in the first period before Flames junior forward Jordan Barstead netted the game-winner with a backhanded finish off assists from linemates Peter Kazmierczak and DJ Dinnison, who cycled the puck from behind the net.

Dinnison later capped the scoring in the third, tapping in a beautiful back-door pass from Barstead set up by Kazmierczak.

"They outshot us but also had the power play advantage," Lowes said, noting the Flames were assessed nine penalties to just two for FGCU on Saturday and trailed the Eagles in penalty calls for the weekend, 15-3. "(On Friday), we played a disciplined game on the whole. Today was a little more feisty," with a couple of the penalties coming on late-night fights out of frustration.

Liberty trailed 4-0 after the first period when Lowes pulled Scott in favor of sophomore goalie Connor Carew, who allowed two more unanswered goals in the second.

In a way, the Flames were relieved to get their first loss out of the way.

"It was bound to happen and a lot of times you learn more from a loss than a win," Lowes said. "We will have a good week of practice and be very intentional in our areas of focus after this weekend. Florida Gulf Coast exposed some things tonight. We'll continue to place emphasis on our awareness on the ice and our execution, which involves precision in our passes and shots, execution of our systems, and being in the right place at the right time."

Liberty hosts sixth-ranked Ohio this Friday at 6 p.m. and Saturday at 3 p.m. at the LaHaye Ice Center in a rematch of its second win of the season.

"That will be a good chance to bounce back against a good opponent," Lowes said.