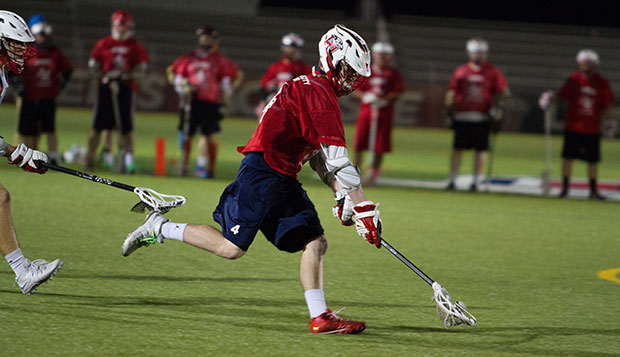 The Flames hosted their annual varsity vs. alumni game over Homecoming Weekend on Oct. 23 at the Liberty Lacrosse Field.

Liberty University's men's lacrosse team concluded an extremely busy Fall Ball season that included a four-team tournament, an alumni game over Homecoming Weekend, a scrimmage win over SouthEastern Lacrosse Conference (SELC) Northwest rival Virginia Tech, and a recruiting showcase that brought in players interested in the program over College For A Weekend (CFAW).

"The recruitment camp was surprising how many people came out and we had some good players come out, which was cool," Flames senior attack Ryan Miller said. "Over 40 came, so it was pretty good to see how many guys were out there. We're definitely growing. It was a good way to see what we're about, see some of the players going against each other, have some fun and show what Liberty lacrosse is all about.

"Our freshman class this year is very good," Miller added. "We'll rely on them a lot, especially for depth. Hopefully, they can get some confidence and help our team go farther than we did last year."

Club Sports videography coordinator Gabe Henderson talked with Liberty Head Coach Kyle McQuillan about the team's progress over the fall and he looks forward to an extremely challenging spring schedule that includes a "Midnight Mayhem" matchup against Florida on April 1 and a regular-season-ending showdown with the Hokies on April 15 at the Liberty Lacrosse Field.

He challenged sports fans who haven't witnessed a game in person to support the Flames this spring and catch the excitement of one of the fastest, and fastest-growing sports in the United States.

"It's probably the most entertaining sport that they haven't seen," McQuillan said. "It's one of the fastest games, it's aggressive, there's physicality, there's a lot of finesse. It's got a little bit of every sport that's out there. It's a lot of fun as a spectator to watch because it's constantly moving. My encouragement is to get people out here in the spring to see what it's all about."