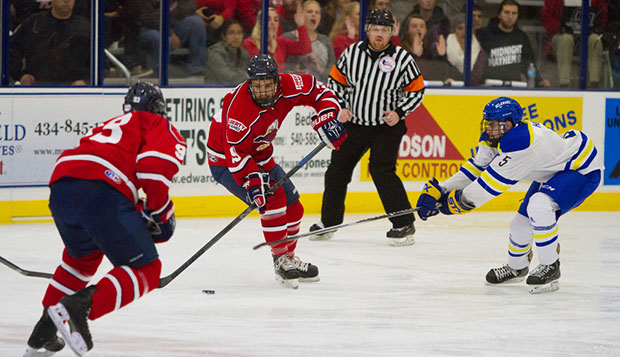 A top-shelf score by junior defenseman Chase Harris directly off a faceoff won by senior forward Danny Logan brought Liberty University's ACHA Division I men's hockey team back within one goal of Delaware late in Saturday night's rematch at the LaHaye Ice Center.

However, the Blue Hens (9-4-2) iced a 4-2 victory and salvaged a series split when their leading scorer, forward Cole Zucker, intercepted a pass inside his own blue line and rifled a long-range shot into an open net after the Flames (4-8-1) pulled starting goalie Matt Pinel for the final minute and a half.

"What a nice shot Chase had there at the end, but we need to have that sense of urgency a little earlier on," Liberty Head Coach Kirk Handy said. "We didn't have a strong first period. We have to not put ourselves in those situations where it comes down to the end of the game and we're still trying to get that (tying goal). There were moments in the game where we played very well, but the consistency of it, where you're executing, wasn't always there tonight. We need to try to find a little more offense."

Senior defenseman and head captain Ben Hughes got the Flames on the scoreboard less than five minutes after the opening faceoff when he received a pass from senior forward and alternate captain Danny Logan and launched a slap shot through traffic from the high slot. It snuck past Blue Hens goalie Dylan Troiano and rang off the post and in for a 1-0 Liberty lead.

But after failing to capitalize on a five-minute major penalty against Delaware defenseman Alex Guerere, who flagrantly fouled Liberty senior forward and alternate captain Bram Erickson, the Flames let the Blue Hens tie the contest with exactly 1:00 remaining in the first period when John Redgate finished a short pass from fellow forward and head captain Leo Skehan in a wide-open left crease.

"I thought our power play was solid tonight, but the five-minute power play, we didn't execute very well on, obviously," Handy said, noting the man advantage was shortened by a hooking penalty assessed to junior forward Grant Garvin. "We took a couple penalties tonight that we can't take."

Delaware, which scored three of its four goals on the night in the final two minutes of the first, second, and third periods, netted the game-winner with 1:50 remaining in the second when Zucker received a pass from forward John Redgate and lifted a wrist shot from the top edge of the right circle past Pinel into the upper netting for a 2-1 advantage.

After killing off a penalty to start the third period, the Flames nearly netted a power play goal when junior forward Robert Ward threaded a pass from the left corner through to Garvin in front of the cage. Troiano made the stop, as he did on subsequent shots by senior defenseman Steven Bellew, Harris —from point-blank range off a feed from Logan — and freshman forward Zechariah Roberts near the right post off a pass from Hughes.

Blue Hens forward Vincent Zingarelli clanged a backhander off the crossbar from close range seconds before Dan Going put away a loose puck in the right crease for the 3-1 cushion with less than three minutes to play.

Now, with their eight-game home stand complete, the Flames will travel to Michigan for three games against Davenport on Thursday and Oakland on Friday and Saturday.

"It's a good road trip for us before our Thanksgiving break," Handy said.

During the second intermission, the Lynchburg Coyotes' youth hockey team took to the ice for an exhibition contest and Handy's oldest son, Parker, netted two goals to lead his team to victory.