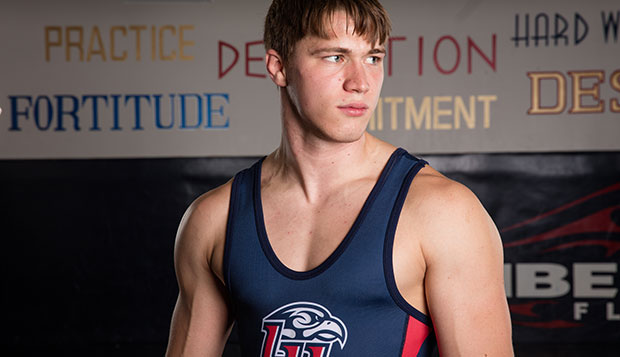 Liberty junior Josh Ferenczy improved on his third-place showing at last Saturday's Messiah Invitational to finish seconds at the Fall Brawl near Philadelphia.

Though no team scores were kept in Saturday's Fall Brawl hosted by Ursinus College just outside Philadelphia, Liberty University's wrestling team had strong individual showings in various weight classes of the 12-team tournament.

"We had four place winners and actually would have had another three place in the top six, which is a pretty good feat considering teams could enter multiple wrestlers in each weight class," Flames Head Coach Jesse Castro said. "Most of the brackets had close to 32 and they all had 20 or more and this was a really good tournament, probably a little tougher than last weekend's (Messiah Invitational and Virginia Beach Nationals)."

Flames junior 174-pounder Josh Ferenczy, who placed third at Messiah last week, advanced to the championship match with three straight victories, including a 14-4 major decision over the Naval Academy's Benoit. In the final, he lost a 5-4 decision to the College of New Jersey's Doug Hamann, who escaped in the final second of the third period to avoid overtime.
Liberty freshman Dell Ngonga finished third in the 125-pound weight class with a team-high six wins, going 6-1.

"Dell Ngonga did really well, period, but for a freshman, especially," Castro said. "He's fun to watch. He lost in round of 16 and had to come all the way through the consolations, so he took the hard route and had a lot more wrestling."

"He wrestled a very steady match and wore the kid down at the end of the bout," Castro said. "He didn't panic in a close match, which shows his maturity and for a freshman, that's impressive."

The Flames had two fourth-place finishes from freshman 141-pounder Logan Smith and junior Charlie Hancock, who was one of four Liberty wrestlers entered at heavyweight since there was no 235-pound weight class.

"Logan beat him in a barnburner of a match, 10-9, after he got a takedown in the last second," Castro said. "I would say his weight class was clearly the toughest of the tournament. The depth was unbelievable and he had some nip and tuck matches."

Hancock's toughest win came in the quarterfinals when he pinned Josh Rodriguez from Mid-Atlantic Conference (MAC) rival Apprentice School — the only NCWA team in the tournament besides the Flames — in 4 minutes, 59 seconds.

"This was probably James' best tournament other than maybe his third-place finish at 235 pounds at our (MAC) national qualifier last year," Castro said.

Senior heavyweight Josh Travers lost in the consolation semifinals and, like freshman teammates Brian DiCesare (133 pounds) and Taylor Westlake (184 pounds) would have wrestled for fifth place had there been a fifth-place bout.

"Our coaching staff was real pleased with where we are right now as a team, and impressed with the doggedness of these guys," Castro said. "Out of probably about 50 matches today, I don't recall one match where we gave up. They kept fighting. We don't have the talent we had last year, but I really like the heart we have on our team."

Next weekend, the Flames will send half squads to tournaments at King College in Bristol, Tenn. — where Assistant Coach Allen Hackmann will take 18 team members to compete against mostly NAIA and NCAA Division II and III schools — and the Joe Parisi Open in St. Louis, where Castro and Graduate Assistant Chris Williamson will bring 12 Liberty wrestlers to compete in a field that includes some NCAA Division I opponents.

"These are the toughest tournaments of the fall," Castro said. "Then, we'll come back for Thanksgiving break and exams and won't compete again until after Christmas."

The Flames will send 13 of its top wrestlers to the Dec. 29-30 Citrus Classic in Fort Lauderdale, Fla.