Flames swept by NCAA DII Crusaders in S.C. (with video) 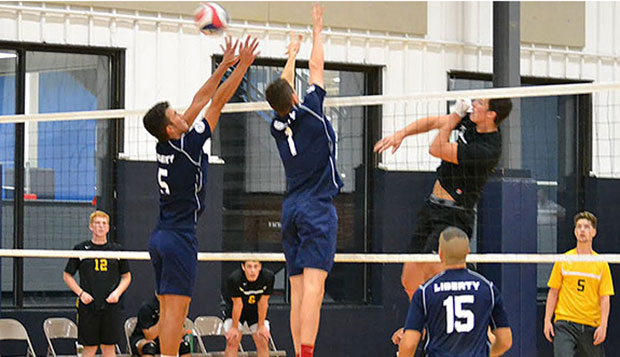 "It was pretty competitive, but that was maybe our worst performance of the season," Flames Head Coach Bryan Rigg said. "It should have been a very close match. We definitely beat ourselves tonight. We just didn't come ready to play and we didn't play our game."

Playing without freshman outside hitter Josh Talamoa, who injured his ankle in Sunday's tournament play, and senior right-side hitter Sam Eisbrenner, who was at a wedding, hurt the Flames.

"Our passing was amazing from (senior libero) Josiah Williams and (sophomore outside hitter) Nick Williamson, but we lost the game at the net," Rigg said. "Sam's a great blocker and we lacked his blocking, and Josh is a huge part of everything we do, including his passes and service receive. So they were definitely missed tonight, but we weren't prepared to play. It was more mental preparation."

North Greensboro was about as strong as the teams the Flames faced in the final rounds of the tournament at Michigan.

"Their guys are physically gifted and pretty much everybody was a jump server," Rigg said. "They were much more consistent with their jump serves. They were aggressive, but they don't miss and if you can't maintain persistent pressure on them, they will put you away. Our passing was good, but we really struggled with communication and our mental game."

Coming off a short week of practice, the Flames have a full week to get ready for their next road trip — to Lancaster (Pa.) Bible College, where they will enter two teams into the 10-team tournament. Defending champion Messiah (Pa.) College, which defeated Liberty in last year's final, Cairn (Pa.) University, and Lancaster should be among the favorites.