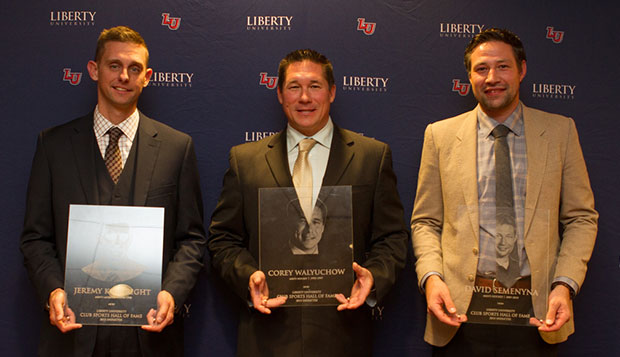 Two player-coaches who helped keep Liberty University's men's hockey and lacrosse teams going at a time when they might have folded and the Flames' top scorer in hockey history were honored Friday night in the Hancock Welcome Center at the second annual Club Sports Hall of Fame induction ceremony.

Corey Walyuchow took over men's hockey coaching responsibilities from Dr. Gary Habermas (an inductee in last year's first class) in the 1994-95 season, when he also earned the Team MVP award as the Flames' starting goalie. He traveled from his home in Calgary, Alberta, where he is a high school teacher and JV football coach after graduating from Liberty with a degree in Education in 1997, and was presented by former teammate Craig Daliessio, who currently manages Liberty hockey's Facebook page.

"Something that I remember Liberty for are the relationships I've made over the years and continue to make," Walyuchow said. "Everybody on the team had a common ground, and that was Jesus Christ. We prayed all the time and talked all the time and it was the mentorship and fellowship that bonded us."

During that same era, from 1994-98, Jeremy Kortright juggled his academic course load as a Sport Management major and handled the administrative and coaching duties of running Liberty's men's lacrosse team. He was also selected to represent Liberty at the National College Lacrosse League (NCLL) All-Star Game all four years as a midfielder.

Kortright and his presenter at Friday's banquet, Kyle Brenon — who he recruited to the team as a freshman and emerged as the Flames' leading scorer — currently volunteer as coaches of the boys' varsity lacrosse team at Spring Mills High School near Martinsburg, W.Va. That school struggled to win one game after starting the program in 2014.

"Jeremy and I had a conversation last year at about this time when he took over as the head coach at Spring Brook, which is a public high school," Brenon recalled. "He said, ‘Kyle, look, this is our goal as coaches. We're not (always) going to make the playoffs. Our goal is to pour into these kids to build character, to love on them, to be examples to them, to use lacrosse as an instrument to speak truth into their lives and to show them who Jesus really is.'"

Finally, Dave Semenyna, Liberty hockey's all-time leader in points (262), even as a defenseman from 2007-10, took the podium after being introduced by former ACHA Division I teammate and member of the Flames' coaching staff Mike Binnie. He was thankful Binnie spared some of the details in what he expected to be more of a roast than an introduction.

Binnie and fellow Flames goalie Dalton Stoltz traveled to Roanoke to pick Semenyna up from the airport on a flight from Las Vegas, where he had played for a couple years in a men's league while working as a landscaper.

"We picked him up the first week classes started so he had no time to prepare," Binnie said of the 24-year-old Semenyna. "We'll just say that his college hockey career began the same way that his academic career started — there was a lot of rust."

He got a rude introduction to the collegiate game when a teammate landed a check in practice that sent him airborne.

"He got his bell rung by another guy who played with us and … the lights turned on for him," Binnie said. "As a skater, he had this ability to deceptively weave through other players who were trying to knock him over. He had this head fake that I guess he learned in Las Vegas and he would weave through guys for shot opportunities to score and most of the time he did."

Semenyna underwent a spiritual transformation at Liberty, where he arrived reluctantly at first, despite growing up in a Christian home.

"When I came here, I was probably one of the hardest people to deal with," Semenyna said. "I was kind of bitter at God and Christians and just to see how all my teammates welcomed me … and loved on me when I wasn't a good person, it was just awesome. They just opened me up to what God really is and showed me His grace."

The new members' plaques will be enshrined in the Club Sports Hall of Fame, located in the recently renovated LaHaye Ice Center, upon the completion of the display area.

Walyuchow, Kortright, and Semenyna will be introduced during the first intermission of the Flames' ACHA DI men's hockey game against Delaware, Saturday at 7 p.m. at LaHaye, site of the first "Midnight Mayhem" hockey game that followed the induction ceremony.