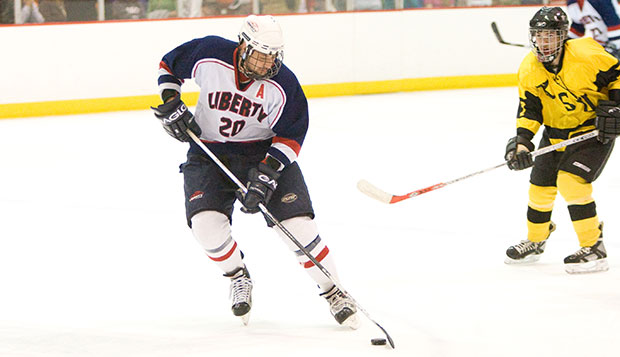 As a sophomore defenseman, Dave Semenyna led Liberty's ACHA DI men's hockey team to the Final Four of the 2007-08 National Championships in Illinois.

Dave Semenyna grew up playing hockey in Alberta and was a journeyman for junior teams in British Columbia, the westernmost provinces of Canada, before finally finding a home in Lynchburg, Va.

"(Former goalie) Dalton Stoltz told me about an opportunity to play at Liberty and I came in as a 24-year-old, after I had taken a few years off and quit hockey for a while," Semenyna said.

Tonight, the all-time leading scorer in the now 30-year history of Liberty University's men's hockey program will take his rightful place in the Club Sports Hall of Fame as one of three members of the second class of inductees at a banquet set for 6 p.m. in the Hancock Welcome Center. Semenyna was voted in on the first ballot he was eligible, five years after concluding his career with the Flames.

Mike Binnie, who played two seasons with Semenyna and coached with him on the men's Division I bench through the 2012-13 season, will be his presenter at tonight's ceremony

Like Stoltz and Binnie — who platooned in goal through the 2007-08 season and later as coach of the Flames' goalies — Semenyna was a Sport Management major. He now serves as Liberty's associate director of Club Sports, overseeing its ongoing construction projects, including the recent expansion and renovation of the LaHaye Ice Center.

Semenyna said his fondest memories of playing hockey at Liberty included "meeting some of my best friends and getting to go on cool road trips." That included a season-ending journey to Illinois for the 2007-08 ACHA National Championships, where they made it to the Final Four in only the second season competing at the Division I level.

"We were a pretty tight-knit group," he said. "We won a lot of games just by being real close and always battling for each other."

From 2006-10, Semenyna established himself as one of the best players in the ACHA, netting 262 points and ranking first all-time for the Flames in both goals (102) and assists (160). What's more impressive is that he did it as a hard-working, offensive-minded, opportunistic defenseman.

To put in perspective how unusual that is — on a team that regularly features one of the most productive forward line rotations in the ACHA — Liberty's second-highest scoring defenseman on their all-time points list capped his career with 85 points, less than one-third as many as Semenyna.

How was he able to outscore a host of talented forwards that have come through the ranks?

"(Defenseman) Coach Jeff Lowes allowed me to have a lot of freedom to roam and play a lot of minutes," said Semenyna, who also ranks second all-time in games played (144) and third in penalty minutes (335). "I had a lot of opportunities to score, mostly on power plays, and I would try to spot up and take advantage of time when weaker lines were on the ice."

Semenyna's career at Liberty was a model of consistency on a team that posted a combined record of 109-38 in his four seasons. Starting in 2006-07, when he was selected to the ACHA All-Rookie first team, Semenyna was a first-team All-American nomination all four years and a finalist for ACHA player of the year in 2007-2008 and his senior season in 2009-2010, along with Flames forward Kyle Dodgson.

"Dave was a special player," Flames Head Coach and Liberty's Senior Director of Campus Recreation Kirk Handy said. "When he was out on the ice, he controlled the game, and he was also a guy who could take the game over for us. He was not only an offensive threat, but also a solid all-around defensive player and a physical presence on the ice."

Handy said Semenyna, who was an alternate captain his last three seasons under forward and head captain Zac Bauman, was often a playmaker and always a game-changer for the Flames from the back line.

"He could make plays late in games that could win games for us, which was a unique gift that he had," Handy said. "He'd either scored the goal or set it up; he would be right in the middle of it one way or another. He was not afraid to step up on the ice. He knew when it was time to have that kind of killer instinct. He would fend off a charge on the defensive end and take the bull by the horns and take it down and put the puck in the net."

Semenyna only improved as his career progressed, and he helped make his teammates around him better, too.

"He was a solid player his first year and became a dominant player by his second year, when he started to elevate his game even more," Handy said. "He didn't sit out too many games. He had the longevity to be able to play every night, and he came to play every night. Showed up to play and became a guy we could count on and one who made a big difference."

He has played the same role working in the Club Sports department over the past five years.

"He's been very loyal to our program, both as a student-athlete and now as a member of our staff," Handy said. "He's always had a youthful approach to things, and been able to keep the atmosphere really light. But he's worked hard and is very involved in what we're doing in Club Sports."