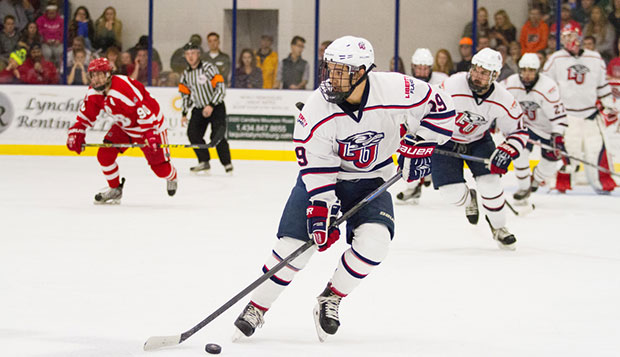 Though they dropped three more notches to No. 18 in this week's ACHA DI national rankings, the Flames are still one spot ahead of the 19th-ranked Blue Hens, who moved up three rungs despite a 3-2 shootout loss to No. 11 Lebanon Valley last Friday night.

Liberty has won its only two previous games against ACHA teams it came in ranked above, sweeping No. 16 Buffalo and No. 14 Niagara by 3-1 counts Oct. 16-17 in New York. That was when it was the No. 11 team in the nation before jumping to No. 6 the following week when computer rankings went into effect.

Regardless of the rankings, the Flames are fully focused on snapping their six-game losing streak, all at the spectacularly renovated LaHaye Ice Center.

He anticipates playing after midnight — following the lead of Liberty's men's lacrosse and men's volleyball teams — will give the Flames the jolt of adrenaline they need to turn up the intensity, though that may be difficult to maintain for 60 minutes at such a late hour.

"Hopefully, there will be a lot of fans here and they'll lift us up, they'll get us going," Harris said.

Last Jan. 30-31, trailing 3-1 after two periods in the second game of a sweep at Fred Rust Arena in Newark, Del., Liberty shifted its offensive lines and outscored the Blue Hens 5-0 in the final 20 minutes.

Harris said the Flames are tinkering with their combinations on attack after implementing new offensive and defensive systems last week.

"We're still looking for the right lines and guys are still getting chemistry," he said.

Liberty scouting report: The Flames are starting to find their scoring punch, but have had to work hard for every chance they have generated of late. Through 11 games, Liberty has only three players reach double digits in scoring, paced by junior forwards Robert Ward (12 points, including 10 assists) and Grant Garvin (11 points), the Flames' leader in goals with eight.

Freshman forwards and California natives Ray Wilson, Zechariah Roberts, and Jackson Giammona each scored their first goals in Liberty's lineup in this past weekend's 5-2 and 8-5 losses to Stony Brook.

"That was awesome," Flames Head Coach Kirk Handy said. "Those guys are good kids that have worked hard all year for us. Big things are ahead for them."

They are three of five Californians on the team this season, along with fellow freshmen forward Michael Thomas and senior forward Kyle Garcia, who are still searching for their first goals.

Between the pipes, the Flames have yet to find a hot hand as their three veteran goalies have been lit up for 46 goals (5.75 per game) in their eight losses — all against teams ranked in the top 10, including a 7-6 shootout loss in the rematch at 2013 ACHA National Champion Minot State, which has spent the past four weeks at No. 1.

All-time series: After winning three of four meetings with the Blue Hens in both of the past two seasons, the Flames have evened the overall series at 12-12-2.

Coaches: Kirk Handy is in his 16th season as Liberty's head coach with an overall record of 336-147-20. Julian Giantonio is in his first season as Delaware's head coach after playing three seasons at NCAA Division III Massachusetts, where he was named Rookie of the Year in 2002, and one at ACHA Division I Arizona, where he received the Wildcats' Team Leader award.