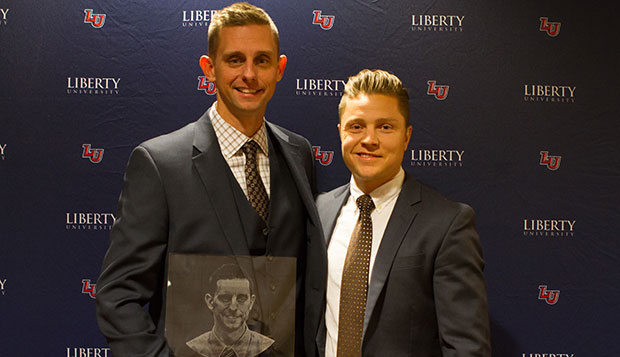 Back in the late 1990s, when Liberty University's men's lacrosse team was relatively new, midfielder Jeremy Kortright had the opportunity to represent the Flames all four years in the National College Lacrosse League's (NCLL) annual All-Star game, bringing exposure to the fledgling Club Sports program.

"It was cool to be recognized by other coaches who weren't in our state," Kortright said of the games played in May at the Naval Academy in 1995 and 1997, West Virginia in 1996, and Penn State in his senior year, 1998. "When they announced the school name, people would say, ‘Where in the world is Liberty University?' and ‘What's going on down there?' To myself, it was a cool deal that the school got some recognition out of it."

Now, it's Kortright's turn, as one of three members of the second class to be inducted into the Club Sports Hall of Fame, this Friday night in the Hancock Welcome Center.

"I'm humbled," he said. "I'm not sure they got the right guy, and I don't say that out of some false humility. It's 20 years ago now and I was just a cog in the wheel."

Kortright scored 60 goals and distributed 35 assists in his four seasons with the Flames, including a career-high 19 goals in 1997 and 16 assists in 1998. Appropriately, former attackman Kyle Brenon, the recipient of many of those assists, will have a chance to reciprocate the favor as Kortright's presenter at the induction ceremony.

"He definitely was a goal-scorer, so I always passed the ball to him," Kortright said of Brenon. "My sophomore, junior, and senior years, he and I always had a rivalry to see who could put up the most points for the season."

But much more important than the goals he scored or set up throughout his career was the leadership Kortright provided the team as a player/coach his last three years, at a time when the program did not have the funding required to hire a full-time coach.

"It was always student-led up to the (current Head Coach) Kyle McQuillan age," Kortright said, noting he dreamed it would one day become established in the MCLA, as it is today, or even the NCAA. "That was always the vision for me. There have been a lot of great leaders that did great things to make this program happen. The four years I was there, it was an uphill battle and we made the most of it. I'm really excited about what they're doing and very proud of what's become a reality."

The Sport Management major modified his spring academic schedule to afford time to line fields, purchase equipment through Play It Again Sports, organize and lead practices, schedule games against area colleges and arrange transportation for the Flames to get to them, as well as hiring refs to officiate them.

With limited space available on campus, Kortright was instrumental in reserving a field at Central Virginia Community College, located just across Wards Road, for Liberty's practices and games and partnering with a Lynchburg-area high school club team, the Mudcats, to develop interest in the sport.

"It was all about building relationships that weren't necessarily positive in the past and changing the culture," Kortright said. "We took a chance, made a lot of changes, and made a lot of progress. We encouraged area high school players to come to practice, which gave us an opportunity to mentor kids and to share the love of the sport. It was actually a very positive experience for everybody, a relationship ministry, essentially, trying to engage a community at a time period when the sport was very new, to generate enthusiasm for the program and to develop relationships."

That included two high school seniors who began their relationship with Jesus Christ as their Lord and Savior at a team meeting in the fall of 1997.

After graduating from Liberty the following spring, Kortright continued coaching lacrosse in Pennsylvania before starting a new program at St. John's Regional Catholic School in Frederick, Md., near his hometown of Hagerstown, while working as the recreation superintendent for the Division of Parks & Recreation in Frederick County, Md.

He stopped coaching soon after his wife, Kelly, gave birth to the first of their four daughters, Sarah, Rachel, Hannah, and Kara. The Kortrights relocated to West Virginia in 2008, the year he started Liberty's Lacrosse Alumni page. Kortright has been the point person for connecting former players to the program ever since, with a membership of more than 100 that continues to grow.

"We try to reach back to the players from the 1980s and 1990s to connect them, bring them to the (Liberty Lacrosse) Field and encourage them to be part of the program and to take interest in and disciple the college kids," Kortright said.

"The annual alumni game (over Homecoming Weekend) is our main event and I give Coach McQuillan a lot of credit for that. Without his initiative, it would never happen. As more kids show up, and alumni come back, it's really blossomed into something special."

Most recently, Kortright has returned to coaching, on a volunteer basis, this time with Brenon on staff. They got the boys' varsity lacrosse program up and running at Spring Mills High School in Martinsburg, W.Va., which opened in the fall of 2013, and followed a 2-9 first season that included one forfeit win with a 9-2 regular-season record and state tournament appearance last spring.