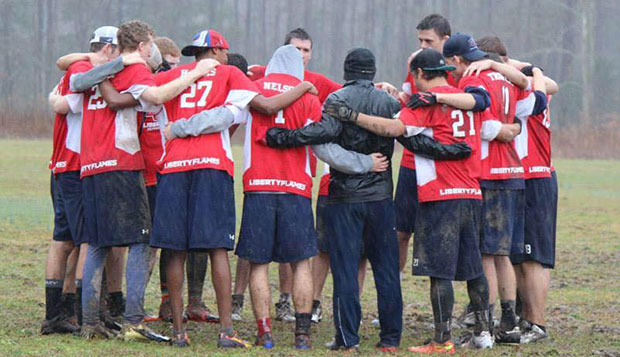 Competing in a fall season-ending Machine Baby Throwdown tournament hosted by Wake Forest, Liberty University men's Ultimate Head Coach Brendan Phillips gave his underclassmen an opportunity to develop their skills in preparation for the heat of battle in the spring semester, which begins in late February.

"The best way you learn is by playing the game, to face different game situations, and learn how to come back when you're down and hold on when you're ahead," Phillips said.

Most teams, besides Liberty and overall champion Old Dominion, split their squads into X and Y teams. The young Flames finished 4-2 in the two-day event, placing third with a 13-8 consolation final win over Davidson's Y team after falling to ODU, 15-3, in the semifinals.

"The newcomers were pretty impressive," said Phillips, who subbed in his top players as needed. "Throughout the weekend, we were trying to keep at least four of our rookies on the field at all times and never had more than three veterans."

"Elon's a very challenging team," Phillips said. "They were the national runners-up two years ago in Divison III and are one of favorites to win it this year."

He was most impressed with the play of underclassmen Jacob Martinez, a freshman handler, and Austin Heston, a very athletic freshman cutter who made several big plays on defense.

Freshman cutter Nathan Sexton turned in the play of the weekend, a "Callahan" on the opening play of the third-place game, when he intercepted a pass in Davidson's end zone for a score.

Among the veterans who contributed were junior cutter Erik Clowdis and senior cutter Jonathan Whitt.

"They didn't play much, but when they were on the field, they were huge difference makers," Phillips said.