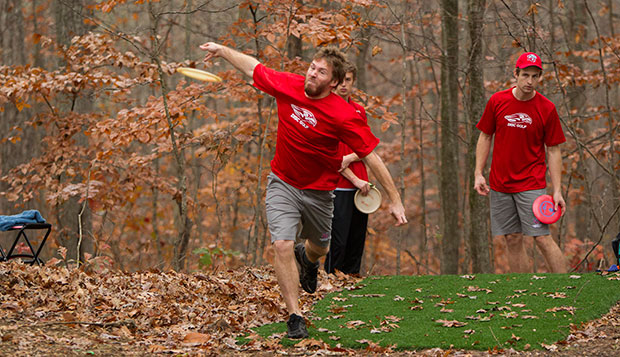 The Flames' No. 3 team of Shumate, Hunter Thomas, Grant Russell, and Zach Ginsburg placed third out of the six competing teams with a 521 total while the Flames' No. 2 team of sophomore Bridger Melton, juniors Ed Lipscomb and Jon Younce (tied for ninth, 71-65-136), and senior Hunter Bass finished tied for fourth with Elizabethtown (Pa.) College at 532. Russell posted the lowest singles round with his 60 on Sunday, but did not compete on Saturday.

The Flames fared better in doubles than singles, with their top foursome of Ballard, senior Justin Towns (tied for ninth, 66-70-136), Swartz, and Brown firing rounds of 55 on the 20-hole course near Camp Hydaway on Saturday and 29 on an adventurous nine-hole "safari" round on the East Campus course on Sunday. The 90-throw total put Liberty in first place in doubles play, and cut into the Wolfpack's 14-throw lead.

"In doubles, we did very well," Towns said. "All four of us make one doubles team and we had a lot of good chemistry. We were communicating well and just having fun. Knowing someone's going to back you up and throw a really good shot, you have a lot more confidence, too."

"We played well in doubles, which was good, but singles is where it's at," Liberty Head Coach Steve Bowman added. "Every year at nationals, we have not performed like we've needed to in singles. Last year, we were consistent. Everybody was within two or three strokes of each other. Now, we just need to take four or five strokes off of those scores."

"We've got a lot of freshmen playing well," Bowman said. "With another few months under their belt, playing in some of the BRAWL Series events this winter, they could put pressure on (the top group for starting positions)."

Lady Flames senior Hannah Croke (85-79-164) and sophomore Dayna Slusher (104-106-210) were the only two female players. A couple other women's players are expected to join in the spring, and would be eligible to help Liberty compete for a national team title.