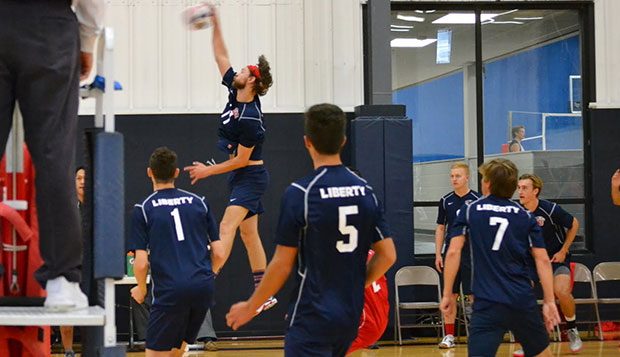 Senior right side hitter Sam Eisbrenner spikes in a match during Liberty's home tournament on Oct. 24.

After competing in six matches in less than 30 hours, Liberty University's men's volleyball team emerged in a fifth-place tie in the 26th annual "Back to the Hardwood Classic," a tournament featuring 50 of the top Division I and II club volleyball teams in the nation, hosted by Michigan State.

As one of 24 Division I teams in the field, the Flames advanced to the final eight before being eliminated by former national champion Wisconsin-Milwaukee in a three-game quarterfinal on Sunday afternoon. The Panthers wound up advancing to the championship match before losing a three-game battle with Illinois, the only other team to defeat Liberty, which went 4-2 over the weekend. The Illini eliminated Virginia Tech, winners of three of the past five Hardwood Classics, in a three-game semifinal.

"Seeing what Illinois and Milwaukee did, we easily could have made the championship game," Flames Head Coach Bryan Rigg said. "It was disappointing not to be there. Part of it for us is the mental maturity we need to have. We beat both of them in the first games before we came back down to earth. We're not real comfortable with success yet. We've got to get that understanding that we can win against the best teams in the country."

Still, the fifth-place finish in the biggest tournament of the fall season should boost the Flames' preseason ranking, due to come out Jan. 30, the day after they host Virginia Tech in the second Midnight Mayhem game in the Vines Center. After peaking at program-best No. 16, Liberty finished last season ranked 25th nationally after tying for 24th place at the National Collegiate Volleyball Federation (NCVF) championships, April 9-11 in Kansas City.

"It was a good tournament," Rigg said. "We saw the top teams from the Midwest, which are typically stronger than the East Coast and even the West Coast. So it was great to get out here and see organized programs that have a long history of success and to go and beat most of them."

"We win games when we pass well, and we blocked at the net that match, too," Rigg said. "Against Illinois, there were some nuanced things we can correct. Our timing with our setters and hitters was still not where we wanted it to be."

Returning at 8 a.m. to play in the opening round of the single-elimination playoffs, the Flames defeated Siena Heights in three competitive games, 25-22, 23-25, 15-12, to advance to the quarterfinals against Wisconsin-Milwaukee, the tournament's top seed. As it had against Illinois, Liberty won the first game before dropping the next two, 21-25, 25-20, 15-10.

Rigg said a turning point for Liberty was losing freshman outside hitter Joshua Talamoa to a low-grade lateral sprain in his ankle in the match against Siena Heights.

"He's a large part of our offense, one of the three serve receivers," Rigg said, noting sophomore outside hitter Scott Zalizniak filled while other players shifted positions. "With Josh going down, he's a multii-faceted part of our team, so we used a bunch of guys to cover for him. TJ (Forsythe) came out of the rotation and we moved (junior middle hitter) Si (Hershberger) to the outside, (freshman middle hitter) John Davenport came in and played middle, and David Hong played on the front row and back row.

"David played very well," he added. "They're both left-handed so he could take his spot when we go to North Greensboro (S.C.) on Friday and Lancaster Bible College (Nov. 21)."

Rigg said Hershberger was one of the Flames' standouts in blocking and hitting while sophomore outside hitter Nick Williamson passed really well and played smart volleyball opposite Talamoa.

"(Senior right side hitter) Sam (Eisbrenner, sophomore middle hitter) Luke (Werth), and T.J. (Forsythe) had games where they were absolutely terrific, hitting balls and getting a lot of blocks," Rigg said. "They were up and down for the tournament. When they were on, they were really on."