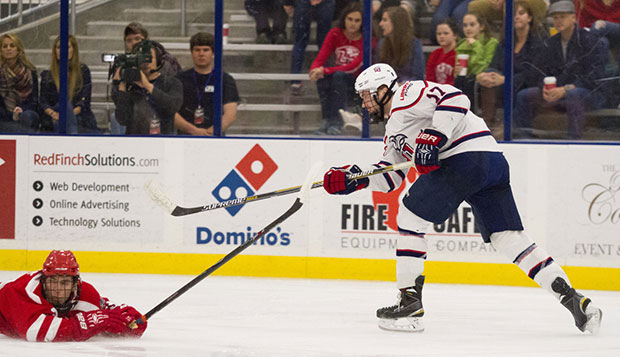 But two goals by the seventh-ranked Seawolves in the final 53.6 seconds — the first on a fast break finish by junior forward Justin Lazalde on the ensuing faceoff — sealed a series sweep by Stony Brook (13-1) with an 8-5 victory, the sixth straight three-goal setback for the Flames (3-7-1) playing in their newly renovated LaHaye Ice Center.

"It was a tough loss, again," said Liberty Head Coach Kirk Handy, whose team was outshot 34-27. "There's no moral victories, that's for sure, but I liked our effort tonight. We had a good start. The second period, we let it get away from us a little bit there. We let three goals in and we had none. I liked our battle back, but we've got to find a way to win the game."

Lazalde completed a hat trick with his last-minute breakaway finish before the Seawolves added an empty-netter by Mike Cartwright with 24 seconds to go for the final tally.

"It was a heartbreaker," Flames junior defenseman Chase Harris said. "To pull within one and for them to go back down and put us away, it was a tough thing, but we're going to keep going. Somehow, we've got to find a way to get to those loose pucks and to win. We've just got to feed off the fans, to put a whole game together, score some goals, and play some good defense."

Liberty graduate goalie Cary Byron made a number of critical saves, particularly with the Seawolves on an early power play. Rather than finding themselves facing an early deficit, the Flames went on the offensive from the start and cashed in on two first-period power plays to seize a 2-1 advantage.

Just 10 seconds into the first man advantage, with 7:42 left in the opening stanza, junior forward Robert Ward put Liberty on the scoreboard with a missile that found the back of the net after receiving a pass from sophomore defenseman Chase Harris near the left side of the blue line.

"I'd like to see him shoot the puck a little more," Handy said of Ward, who's tied with junior forward Grant Garvin for Liberty's scoring lead with 12 points, including a team-high 10 assists. "He's got a great shot and if he shoots a little more, more would drop for him."

Stony Brook struck back just 35 seconds later when head captain JT Hall finished from deep in the left circle after recovering a loose puck. Liberty reclaimed the lead with 1:30 left in the opening stanza when sophomore defenseman and head captain Ben Hughes launched a shot from the high slot and freshman forward Zechariah Roberts crashed the cage and pounced on the putback, shuffling it into an open net for his first goal as a Flame.

Unlike in previous contests, when opposing teams took control soon after the opening faceoff, the second period turned out to be Liberty's downfall as Stony Brook scored three unanswered goals to turn a 2-1 deficit into a 4-2 lead.

Seawolves forward Tyler Underhill, who like Hall scored twice in Friday's 6-3 win, netted the equalizer from a tough angle inside the near post after taking the puck out from behind the net, tying the game at 2-2 with 15:55 left.

Liberty senior alternate captain Bram Erickson was called for charging when he checked Stony Brook defenseman Frank Coscia against the boards and the Seawolves capitalized on the ensuing power play to take a 3-2 advantage when Hall fed Lazalde in the left crease, where he beat Byron to the near post.

With 10:05 left in the second period, Byron was accidentally taken out by Hughes on a scrum in front of the cage and Stony Brook forward Eddie Osowski cleaned up a rebound from out in front top shelf for a 4-2 lead.

Liberty traded goals with the Seawolves early in the third period, with Erickson answering a counterattack goal by Brendan Calello that beat Friday night starter Matt Pinel by digging the puck out of the left corner and finishing assists from fellow forwards Kyle Garcia and Tyson Street in the left crease.

Lazalde appeared to ice it for Stony Brook by putting away a rebound of a shot from the top of the left circle in the left crease before Liberty freshman defenseman Jackson Giammona netted his first goal as a Flame with a shot from along the left boards set up by Street. Just 33 seconds later, Garvin one-timed the rebound of a fast-break shot by senior alternate captain Danny Logan past Stony Brook goalie Todd Scarola to bring Liberty back to life, if only momentarily, trailing 6-5.

"We've got to play to win," Handy said. "We moved forward tonight. We're heading in a good direction. We'll have a good week of practice and we've got to come back ready for Delaware next week."

The Flames host the Blue Hens in their first-ever Midnight Mayhem game on Friday, when the puck drops at midnight before Saturday's second game time is 7 p.m.