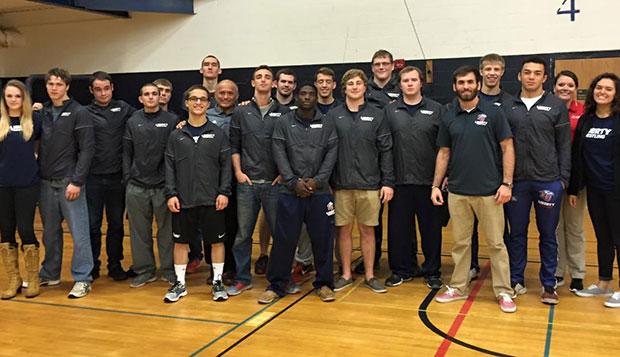 Meanwhile, Liberty Head Coach Jesse Castro and graduate assistant Chris Williamson, a Messiah (Pa.) College graduate, carried the rest of the team to the Messiah Invitational, where the Flames finished fifth in a field of 12 teams, many NCAA Division III programs. The host Falcons, a DIII squad, won with 136 points followed by Elizabethtown (Pa.) with 86, Wheaton (Ill.) with 70.5, Ursinus (Pa.) College with 61, and Liberty with 58.

"I didn't know what to expect because it is such a young team," Castro said. "We got some good surprises and were pleased with some of the young guys. They all did a good job and had very respectable showings."

At Messiah's Sollenberger Sports Center, the Flames featured four place-winners led by former Falcons wrestler Evan Canady, a 235-pounder who placed second at heavyweight. They also had third-place showings from freshman Brian DiCesare at 133, freshman Logan Smith at 141, and junior Josh Ferenczy at 174.

"The newcomers are raw, but have a disposition of heart that shows promise," Castro said.  We have a long way to go until our (Mid-Atlantic) Conference and (NCWA) national tournaments, but we are on the right track. I like our starting point, actually, in these opening tournaments. We've got a long way to go to be where we need to be, but we've made definite progress."