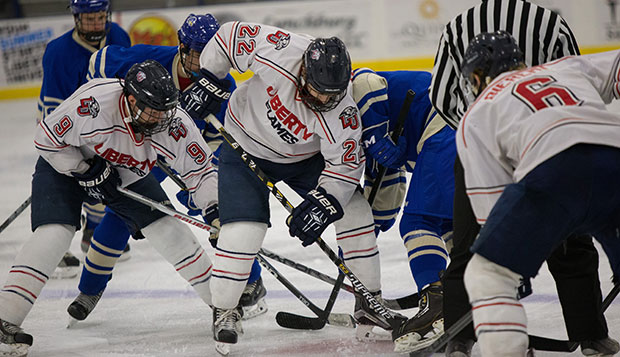 Flames graduate forwards Christian Garland (12) and Ryan Kerr (9) dig a puck out of a crowd in front of junior forward Tim Bierema in Friday's game at the LaHaye Ice Center.

The Flames, ranked No. 1 in this week's first ACHA DII Southeast Region poll, improved to 12-0 on the season with eight of their wins coming against teams ranked in the top 10 in their respective regions.

After opening a 2-0 lead late in the first period on goals by junior forward DJ Dinnison and sophomore forward Tim Bierema, Liberty had its streak of eight straight periods without allowing a goal snapped in a second when UMBC (11-6) broke through for three goals to match the Flames' offensive production that period.

The Retrievers cut the deficit in half on a goal by senior forward Zachary Tracy before Flames junior forward Devon Docksteader extended the advantage to 3-1 with 11:34 left in the second. He chased down a lead pass from sophomore defenseman Adam Gnatowski in the Retrievers' right circle and cut back to the left crease before slipping a backhanded shot past UMBC backup goalie Matthew Berry, a converted defenseman making his second start in net in place of injured sophomore Dylan Knox. (Berry made 30 saves in a 1-0 loss to Virginia Tech, Friday night in Roanoke.)

Just 30 seconds later, the Retrievers struck back to make it a 3-2 contest on a putback from near the left post that snuck past Liberty goalie Connor Carew.

With 4:30 left in the second, sophomore forward Jordan Barstead padded Liberty's lead back to two goals by finishing a lunging crossing pass by Dinnison from near the right post. Then, with 2:20 to go, the Flames made it 5-2 on a beautifully executed passing sequence on a power play, with senior forward and head captain Paul Ingles sending a cross-ice pass to Docksteader at the top of the right circle where he spotted Freymond cutting through the left crease and threaded a pass to his stick for an easy putaway.

The Retrievers got one back in the closing 10 seconds of the period when sophomore Greg Zieglar sent the puck off the boards from the top of the left circle and it bounced right to senior DJ Fadler in the left crease for a sharp-angled top-shelf finish. But Liberty took complete control of the contest with three unanswered goals in the third, the first and third by Freymond.

In between, the Flames netted their second power-play goal off another assist from Ingles when junior defenseman Ryan Sidun wristed in a rebound of a shot by Docksteader from near the left post.

"We wanted to stick to our game, kind of put the gas on the pedal, and show them our offense can put pucks in the net," Dinnison said of the Flames' focus going into the third period. "We didn't want to be complacent and sit back and just try to hold them off. We got it going in the third, which was huge."

Liberty, which played its first eight games on the road, takes its longest trip of the regular season next Friday and Saturday when it travels to Fort Myers, Fla., to face Florida Gulf Coast, the second-ranked team in the Southeast.

"Our focus is just the next game and elevating our game," Dinnison said. "We're a confident group and we're pretty happy with what we've got going on right now. We celebrated in the locker room, but now we've got a long road trip. It's our biggest challenge of the year, for sure, and our focus starts now."