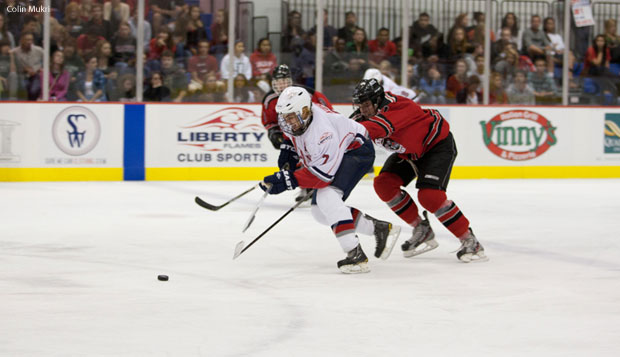 The Liberty Flames Division I men's hockey team got more than they bargained for early on from the Atlanta Jr. Knights Friday night at the LaHaye Ice Center, but Rick Turner notched his third straight hat trick and B.J. Pirus added a pair as the Flames were able to pull away and win their third game in a row 8-4.

Much like last Saturday against the Hampton Jr. A Whalers, the visitors struck first, as Tyler Pionk scored on a feed from Joseph Panek and Atlanta was up 1-0. Kyle Garcia quickly answered for Liberty off a Ryan Kerr assist to tie the game at 1.

Rick Turner continued his torrid early play as he walked in unassisted and beat Knights goalie Austin Campbell stick side to give the Flames their first lead at 2-1. The lead was short lived, as William Bray took a loose puck and stuffed it home to tie the game at 2. Jordan Simmonds took a puck just 90 seconds later and the Knights retook the lead 3-2 midway through the first. Ryley Egan retied the game, notching his third of the year on an assist from Bram Erickson with under a minute to go.

Turner put the Flames ahead for good early in the second as Kerr notched his third assist of the night, picking up his own hat trick of sorts on the play. Kerr wasn't done as he helped Pirus notch his first goal as a Liberty Flame 3 minutes later on the power play to put Liberty up 5-3.

Turner nailed down his third hat trick early in the final frame off an assist from Cam Bakker, and Ty Street picked up his first point as he assisted on Luke Baumgarten's first goal of the season. A pair of rookies connected with about 14 minutes to go as Pirus and Garcia hooked up and Liberty converted its second man advantage of the night to go up 8-3. Simmonds converted a late penalty shot to complete the scoring, but the Flames held tough and picked up the win.

Clayton Brown played all 60 minutes for Liberty, stopping 23 shots to pick up his third win of the year. Campbell played all 60 in the pipes for Atlanta and stopped 25 in the losing effort. The Flames outshot the Knights 33-27 in the victory.

The two teams will conclude the two-game set Saturday night at the Ice Center, with the puck set to drop at 7 p.m.