Slow start leaves Liberty at a loss in opener vs. Stony Brook 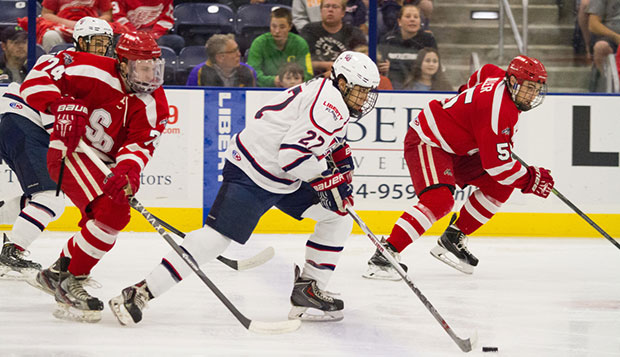 Digging a 3-0 deficit in the first five minutes of Friday night's opener against Stony Brook was obviously not what Liberty University's ACHA Division I men's hockey team wanted to do against a team that has reached the Final Four of the past two ACHA DI National Championships.

"We've got to get off to better starts," Flames graduate defenseman Peter Shantz said. "This is the third or fourth game where we've been down two or three goals in the first five or seven minutes. We can't have that anymore. We can't bury ourselves early like that and expect to come out with a win."

Liberty's 6-3 loss to the seventh-ranked Seawolves (12-1) was its fifth straight three-goal setback — all against teams ranked in the top 10 of ACHA DI — since re-opening the renovated LaHaye Ice Center over Homecoming Weekend.

"You can't go down 3-0 against teams like that because you won't come back, so that's inexcusable," senior defenseman Kyle Miller said. "No excuses from our end. You've got to show up to play."

The Flames (3-6-1) did get two goals back in the next three minutes, the first on a shot from the left circle by Miller, who followed a shot by freshman forward Owen Harris by taking a pass back from junior forward Grant Garvin.

They had a second called back when the cage was bumped off its moorings on a pass from behind the net from Garvin and point-blank shot by junior forward Robert Ward. Seconds later, with Liberty on a power play, Ray Wilson, skating through the left circle, made it a 3-2 game with 11:52 left in the first on his one-time chip shot of a pass from along the left boards from fellow freshman forward Michael Thomas. Sophomore defenseman Ben Hughes set up the play by stopping a Stony Brook clearing attempt near the blue line before senior defenseman Steven Bellew sent a cross-ice pass to Thomas.

After junior forward JT Hall capped the first-period scoring with his second goal of the period, finishing a backhanded assist across the net from in the left crease, the Seawolves had three power plays in the first 10 minutes of the second period. They capitalized on the second when sophomore defenseman Frank Sherding launched a shot from the left side of the blue line that was deflected past Liberty starting goalie Matt Pinel by senior forward Tyler Underhill, who also chipped in the Seawolves' sixth score a split second after their fifth power play of the period expired with a minute remaining.

The Flames got one power play goal back in the third period when sophomore forward Chase Harris unloaded a shot high off the glass and senior forward Danny Logan ricocheted the rebound from behind the left pipe off off the back of Stony Brook senior goalie Derek Willms' leg into the net.

But they missed several near chances to cut into the deficit early at even strength early in the third, on shots by Logan, Ward, Garvin, Wilson, and sophomore defenseman Paul Lamoureux, before failing to mount much of a scoring threat on a final power-play opportunity.

"They outworked us and that's embarrassing to have happen on home ice," Miller said. "We've got to figure out internally why we can't get ready to go for games here. The visiting teams come in here and they're just as amped up as we are, if not more, so if we're not ready to play, they're going to do what Stony Brook did to us and do what Ohio did to us the first game, and Davenport."

The Flames hope to get out to a faster start, with more energy from the opening faceoff, when they take to the ice for Saturday night's rematch with Stony Brook at LaHaye, where the puck again drops at center ice at 7 p.m.

"It's tough to keep saying, wipe the slate clean, but that's all you can do when you're in a hole like we are," Miller said. "Just show up to the rink, try to do better preparation, and go for a better result."

"It starts with preparation earlier in the day, everybody getting dialed in and warming up right, being intense and intentional about your actions starting the game," Shantz added.