Numbers down, but Flames still dangerous on paintball field 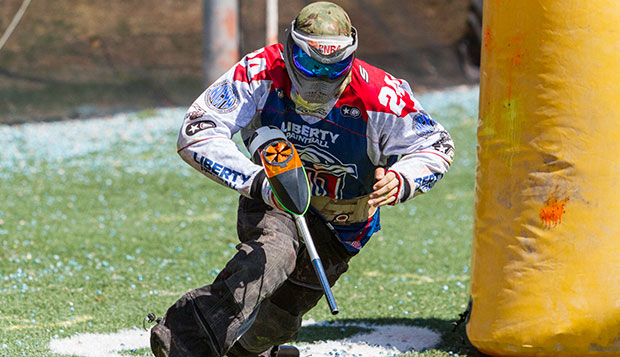 Senior John Lewers returns to anchor Liberty's Red line as a Dorito-side player who can also attack up the middle.

Liberty University's paintball team may not have the numbers on its side as it has in recent years, but the Flames' two lines of attack feature the firepower and intestinal fortitude needed to survive and advance past less determined opponents.

After their first event, the Liberty Open, was rained in early October, the Flames will have the opportunity to gauge their tactical and technical, physical, and psychological strengths and weaknesses against a 14-team field at Saturday's season-opening Class AA tournament in Louisville, Ky.

"We have been practicing hard, doing a lot of conditioning to be ready to compete, so it's exciting to put all our practice and hard work so far to the test," Liberty second-year Head Coach Bryan Davidson said as he and his 13 team members embarked on the eight-hour drive to Kentucky on Friday. "We're finally getting to compete and we're hoping to start off to a strong start. These guys are hungry for competition, hungry for a win."

He said the Flames have held more than enough skirmishes against themselves and are ready to challenge opponents from rival schools in a tournament that will include high-level opposition from Virginia Tech, Purdue, and Indiana.

"We've lost a lot of seniors from last year, players in the middle, and we're still rebuilding ourselves up," Davidson said. "We've taken a hit on every line, but our two top lines are looking pretty good. Our bottom line has had to learn pretty quickly against our top line."

Starting at 8 a.m., Liberty's two lines will compete in a standard Race to 2 format in preliminary play, with the team that eliminates the five opposing shooters and captures their flag twice first winning the battle. The eight teams with the best records in preliminary play will advance to the finals.

The Flames' Red line is anchored by junior Kayne Boyer in the back and senior John Lewers on the Dorito side or in the middle.

Next weekend, Liberty will travel with one team of 10 players to, for an MSCC Class A Event No. 1 in Canton, Ga.