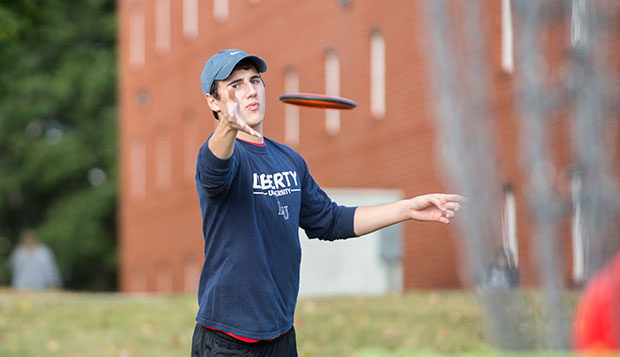 Grant Russell, one of three Flames freshmen with tournament experience, practices his putting before a clinic at Liberty put on by Paul McBeth and Nate Sexton, two of the world's top players.

The Flames, who have already qualified for nationals based on their best-ever top-10 finish last year, will enter three four-man teams into the tournament, competing against squads from North Carolina State, Elizabethtown (Pa.) College, and Columbus (Ga.) State University which have confirmed, and possibly West Virginia University and UNC Asheville.

Singles and doubles play will tee off with shotgun starts at 9 a.m. and continue through 5 p.m. on Saturday, using Liberty's new 20-hole course located near Camp Hydaway, and conclude on Sunday at the same times on the team's original 20-hole East Campus course.

From 6 to 9 p.m. Saturday, there will be a distance driving competition, and a putting and a mid-range skills challenge for all players at the Liberty Lacrosse Field, the central headquarters for the tournament.

Liberty may have a deeper men's team than ever before, led by senior captain Lance Brown and senior Justin Towns as well as graduate students Devin Swartz and Daniel Ballard.

"We'll have a good lineup and our second string is going to be really strong , too," Flames Head Coach Steve Bowman said. "We've got guys dueling for spots through tag tournaments, inter-squad challenges, and they're getting their mindsets ready to compete. It's all about being patient, taking opportunities when they present themselves, and if you make a mistake, don't let it drain on you. You've got to be mentally ready and figure out what the best approach is for the next shot."

Freshmen Ryan Shumate, Grant Russell, and Hunter Thomas will enter their first official tournaments for Liberty after coming in with plenty of open experience.

"We've got a great bunch of guys who are really focused on improving what they're doing," Bowman said. "They have a passion to play and are absorbing everything we're teaching them."

Liberty also will send out a couple of its women's players for practice, though none of the other programs will bring any female competitors. Hannah Croke, who took last year off, is back for her senior season and will be joined by Dayna Slusher, a first-time player who is improving tremendously.