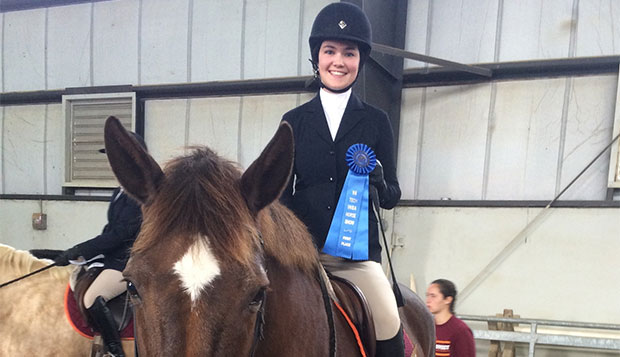 The host Hokies were the runaway team champions, extending their lead in the Intercollegiate Horse Show Association (IHSA) Region 5 hunt seat standings while Wake Forest and Elon have settled into the second and third-placed positions.

The Lady Flames were again competing without junior co-captain Liz Chenelle, who was injured before the first competition but expects to be ready to make her season debut at this weekend's final show of the fall, again hosted by Virginia Tech.

This past Sunday, Liberty was forced to take zeroes in two events, so Head Coach Jim Arrigon said the final team score, which placed the Lady Flames in the lower half of the 10-team competition, was not reflective of the team's performance.

"Overall, though we didn't get the ribbons we wanted because they made too many mistakes that cost them, this was an improvement on the season and we keep getting better," Arrigon said. "We started the year with three-quarters of our riders new to the team, so I've been doing a lot of straight-up teaching so far, trying to get everyone caught up with a new system. After two months I'm starting to see some people really embracing the system. I'm looking forward to a good second semester."

This weekend, while the hunt seat team is back in Blacksburg, Liberty's western team returns to the ring at Martin Community College in Williamston, N.C.  The western team has a brand new coach, Lauren Eagles, a former rider at Missouri State University.