Flames debut at No. 1 in ACHA DII Southeast Region rankings 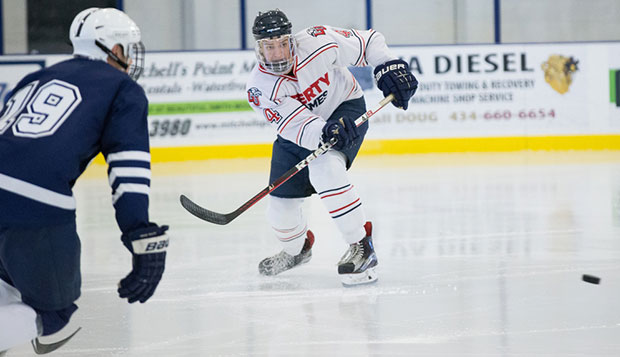 For the first time in its history, Liberty University's ACHA Division II men's hockey team is ranked No. 1 in this week's first Southeast Region poll. The Flames (10-0) debuted one spot above perennial powerhouse Florida Gulf Coast University, a team they will travel to play Nov. 13-14 in Fort Myers, Fla.

"The way I look at it, it's exciting for the program," Liberty Head Coach Chris Lowes said. "It's a great accomplishment, and more about what we've done over the past several years … the growth and continued success and reputation we've developed throughout the league."

The Flames notched their second victories of the season over fourth-ranked Penn State and No. 14 Rider this past Friday afternoon and Saturday morning, respectively, their first two home games in the newly renovated LaHaye Ice Center.

"It was a great weekend," Lowes said. "Friday was a perfect home opener for us. We had good crowd support and it was a great game, which came down to the wire and could have gone either way. The guys just need to execute and have awareness and battle and find a way to win. It's been a combination of things. We've got some balanced scoring, some pretty solid defensive play, and it comes down to good character and leadership and guys coming together to play as a team."

Of the Flames' 10 games, six have come against teams ranked in the top 10 in their respective region.

"To play all 10 games against (top-20) ranked teams, that's good for us," Lowes said. "It's kept our guys' competitive juices flowing and engaged in what we're working on. We've had some real tight games and others that we've broken open."

The ACHA ranking is the first of four, with the final three set to be released at the end of November, December and February, when the top two ranked teams in each region receive automatic berths into the ACHA DII National Championships.

"We set team goals from start of the year, to win a (MACH regular-season and tournament) championship and to make the Southeast Regional tournament (for a third year in a row)," Lowes said. "To finish ranked in the top two and get an autobid is up there."

Being ranked so high so early in the year is not necessarily a good thing, unless the Flames can avoid complacency and rise to every challenge they face — starting with this Friday's 9:45 p.m. rematch with Delaware and Saturday's first showdown with UMBC at 2 p.m., both Mid-Atlantic Conference South Division foes.

Though they are not looking past the Blue Hens or Retrievers, the upcoming trip to Florida is in the back of the minds of many of the Flames, especially after finishing 0-5 against the Eagles last season.

"We're focused on Friday night," Lowes said. "I know the guys are aware of (FGCU), obviously. They've been running over teams. Playing in a hostile environment down there, we'll give them our best shot."

"That will be a good test, for sure," Liberty senior forward and head captain Paul Ingles added.