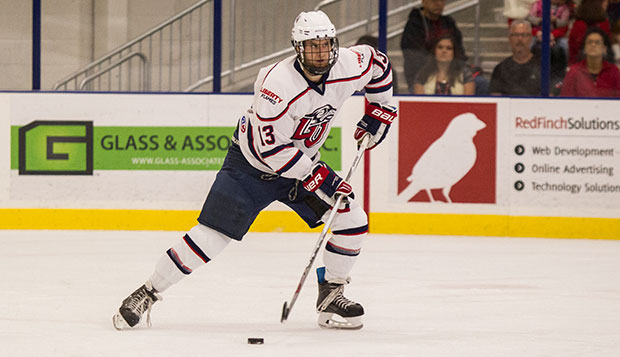 For the third time in a row in the newly renovated LaHaye Ice Center, Liberty University's ACHA Division I men's hockey team fell behind early, allowing ninth-ranked Ohio (10-2-1) to scored three unanswered goals in the first period Friday night en route to a 6-3 triumph over the No. 12 Flames (3-4-1).

"We just didn't have the game we needed in the first period and we turned around and it's 3-0," Liberty Head Coach Kirk Handy said, noting the Flames were outshot by the Bobcats 21-4 in the opening 20 minutes. "That's not the best recipe against a good hockey team. You have to come to play and we didn't."

When Ohio head captain Michael Thomas stretched the lead to 4-1 with his second goal — a counterattack breakaway finish into the top right corner of the cage with 7:49 remaining in the second period — it looked like Liberty might go quietly against the Bobcats, who eliminated the Flames from two of their past three national championship tournaments and spent a week this season at No. 1.

"That was a bit of an unlucky play," Handy said. "That shift was kind of ironic because we were all over them. Bram (Erickson) had two great hits and that line of Bram, (Kyle) Garcia, and (Tyson) Street had a great game tonight. That was a bounce that went their way. We need to work harder for our bounces to come our way."

As they did against Davenport in the second game last Saturday, the Flames fought back to make it a game, cutting the deficit to 4-2 on Grant Garvin's second goal off a wraparound assist from fellow junior forward Robert Ward with 2:30 left in the second period.

Later, sophomore forward Paul Lamoureux snuck a backhanded shot from point-blank range past Ohio goalie Aaron Alkema after gathering the rebound of a shot from the right wing by senior defenseman Steven Bellew, closing the gap to 4-3 with 16:50 left in the third period.

"The positive was, when we did wake up, there was a real good pushback," Handy said. "In the second period, we came out and scored a power play goal in the first minute and outplayed them 2-1 and really, in the third period, had a solid start … and we're right there in the game."

However, the Bobcats pounced on another power-play opportunity after Bellew tripped up Ohio forward Matthew Hartman on a breakaway, which could have warranted a penalty shot. Instead, Hartman put away a cross-crease pass from Liam Geither — who had scored the Bobcats' third goal in the final three minutes of the third period — and Patrick Spellacy finished a backhanded assist across the goalmouth from Joe Breslin for the final score with 9:02 remaining.

"We have to be a little stronger in our own zone," Handy said. "Specifically, tonight, there were a couple plays where we just got outmuscled on pucks. That's something we've got to figure out. The encouraging thing for us is that's a team that if we play 60 minutes of hockey against, it's a different game. We need to have a way better start (Saturday) than we did tonight."

The Flames will look to bounce back against the Bobcats in Saturday's rematch at LaHaye, where the puck is set to drop at 7 p.m.