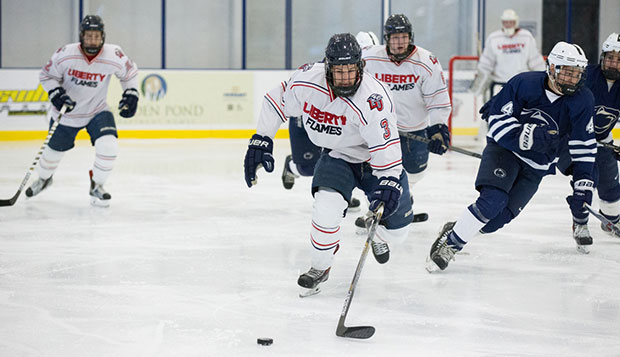 After trading scores in the first and second periods, the Flames netted two unanswered third-period goals to surge past Penn State, 3-1.

Liberty struck first less than three minutes after the opening faceoff when Devon Docksteader showcased his stick skills on a spectacular backhanded finish of a fast-break feed from head captain and fellow junior forward Paul Ingles.

"That's just Devon Docksteader doing his thing," said Flames senior forward and alternate captain Peter Kazmierczak, who was named his team's player of the game. "He's got the best hands on this team, he's probably the most talented individually on this team. He dangled a couple kids and roofed it. That got the boys going."

Penn State rallied back to tie the contest midway through the second period when junior forward Josh Singley stole the puck and started a quick counterattack, which he capped with a wrist shot from the right circle into the upper left netting.

The score remained knotted at 1-1 for exactly 21 minutes until Kazmierczak received passes from junior forwards DJ Dinnison and Jordan Barstead in the left circle and watched his shot slip through the glove of Ice Lions junior goalie Matthew Ehrlichman into the back of the net.

Graduate forward Ryan Kerr appeared to give the Flames a two-goal cushion by batting in the rebound of a shot by Kazmierczak a split second after the cage came off its moorings. But Liberty added an insurance goal with 1:23 left in the third when junior forward Ben Freymond, stationed in the right crease, finished the second putback of a perimeter shot by Docksteader and follow by graduate forward Christian Garland.

"We've had some blowout wins, but we'd rather be in this position to see the character of the team," Kazmierczak said. "In the third period, everyone sort of recognized it's their individual responsibility to win every single battle, not their linemates, not the next line. It was a special thing."

He credited freshman goalie Blake Scott for keeping the Flames in contention to pull out the win.

"We have to attribute the turnaround to Blake Scott," Kazmierczak said. "He made some huge saves and deserved to be player of the game. I don't think we're in that game if he doesn't make those saves."

The win was their third in a row over the Ice Lions, starting with last season's overtime upset in the Southeast Regional tournament that sent them to the ACHA DII National Championships for the second year in a row. It should solidify Liberty's ranking as one of the top two teams in the first Southeast Region poll, due to be released in early November

Penn State, which lost to Liberty at a DII showcase hosted by Louisville on Oct. 9, was coming off a 7-1 upset of ACHA Division I rival Robert Morris-Pennsylvania, last Saturday in State College, Pa.

The Flames will look to go to 10-0 on Saturday at 11 a.m. at LaHaye in a rematch with Rider, a team they came from behind to defeat last Saturday in Lawrenceville, N.J.