Lady Flames move up to No. 1 spot in ACHA Division I poll 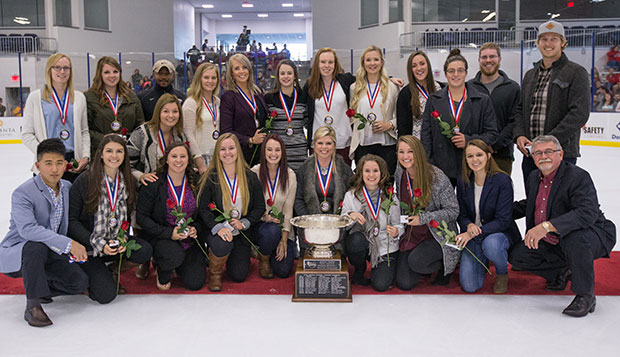 The Lady Flames (5-1-1) moved up from the No. 2 spot in the Preseason Coaches Poll, overtaking Miami of Ohio, the 2014 national champion which they defeated in last year's final, after rallying past No. 3 Adrian in the semifinals and No. 4 Massachusetts in the final round of pool play.

After opening its season with a loss and a tie against the Washington Pride club team, Liberty swept No. 5 Rhode Island on Oct. 10-11 in Kingston, R.I., despite traveling with a roster of only 12 players. The Lady Flames swept Vermont in their home openers at the renovated LaHaye Ice Center over Homecoming Weekend, when they were presented their national championship rings during a ceremony at the first intermission of Saturday's DI men's game against Davenport.

Liberty has three weeks off before challenging the 12th-ranked Lady Panthers on Nov. 20 in Grand Rapids, Mich., and No. 6 Grand Valley State, a team it shut out in the second round of pool play at nationals, Nov. 21-22 in Allendale, Mich.

The final three ACHA DI polls of the 2015-16 season are scheduled to be released Nov. 22, Jan. 17, and Feb. 21, two weeks before the start of the national championships, which will include only the teams ranked in the top eight in the final poll.