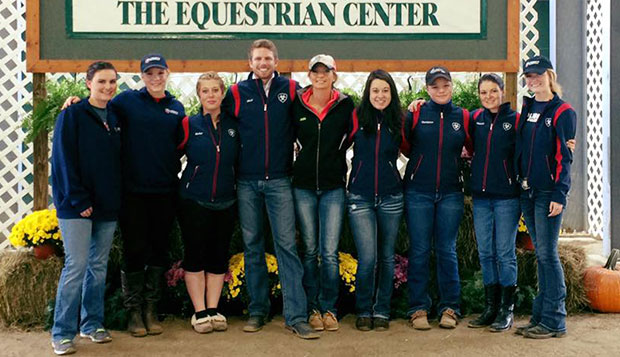 While its hunt seat team was off over the weekend, Liberty University's western team participated in its first show of the fall season, traveling to St. Andrews University in Laurinburg, N.C., for a two-day event held Saturday and Sunday.

St. Andrews, which finished sixth in the nation in 2015, hosted nine teams at its on-campus facility, and Liberty placed fourth as a team on Saturday, behind teams from North Carolina State, Virginia Tech, and St. Andrews, with a blue-ribbon performance from freshman Leah Joy Ofalt.

On Sunday, the Flames were in second place behind St. Andrews — which came in one ribbon short of a perfect score — until the final class of the competition before being edged by the Wolfpack. Hannah Peterson, a freshman who placed third in her division on Saturday, earned Liberty's only blue ribbon and Ofalt came in second, helping the team to a third-place showing.

Starting Nov. 2, Liberty will have a new western team head coach, Lauren Eagles, to complement Equestrian Center Executive Director and Hunt Seat Head Coach Jim Arrigon. Eagles was a star collegiate rider for Missouri State University, exceling in both reining and all-around competition, and has been working in business in Springfield, Mo., since graduating a few years ago. She will take the reins of the western team in time for its show hosted by Martin (N.C.) Community College on Nov. 7-8.

This Sunday, Liberty's hunt seat team will be back in action for a show at Virginia Tech.