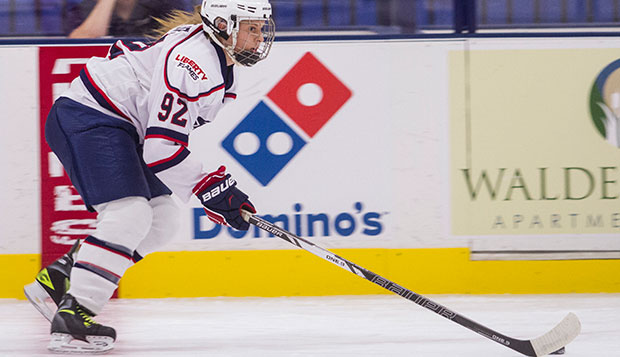 "Carrie works hard, she's a point-getter and she's not doing it to get points," Liberty Head Coach Paul Bloomfield said. "She's glad to let her linemates get as many goals as they can get."

In completing the two-game sweep of the Catamounts (0-9), Liberty (5-1-1) got extremely balanced scoring, with three players netting two goals or more. Gilmour put away the first two, finishing a backhanded pass from Catherine Burrell in the left corner before taking a beautiful backhanded feed from Jickling in the left crease.

Sophomore C.J. Tipping then launched the first of her two scores from near the blue line into the back of the net for a 3-0 advantage with 3:00 left in the opening stanza. Graduate forward Nikki McCombe finished a give-and-go assist from Nicole Douglas on the back right boards with a backhand deep in the right crease to stretch Liberty's lead to 4-0 with 15:30 left in the second period.

"I wanted the girls to continue to play hard and stay in the game and I felt like they did a good job of keeping focused," Bloomfield said. "In the third period, we did a lot of moving people around and tried different systems so the girls had a chance to practice. It kept them busy, too, so they weren't thinking about the score as much as focused on the game."

After Jickling put away a feed from Burrell from behind the cage, Tipping's second long slap shot from the high slot snuck through traffic in front of the cage, extending the edge to 6-0 before freshman defenseman Katie Comeau netted the last two scores from the top of the left circle.

Freshman goalie Kelly Hutton, a backup for sophomore Rosie Kelly, posted the shutout for the Lady Flames, making back-to-back saves midway through the contest with players from both teams getting into a pushing match around her.

"Kelly played a really strong game in the goal and I'm really glad I had the opportunity to get her in again," Bloomfield said. "She's got two or three games under her belt which has been good experience to kind of get the jitters out and give her the confidence that she can play."

The defending ACHA DI national champion Lady Flames received their rings during a red-carpet ceremony on the ice during the first intermission of the DI men's game against Davenport earlier in the day.

The Lady Flames have three weeks off before embarking on a three-game road trip to Michigan, playing at Davenport on Nov. 20 and Grand Valley State Nov. 21-22. 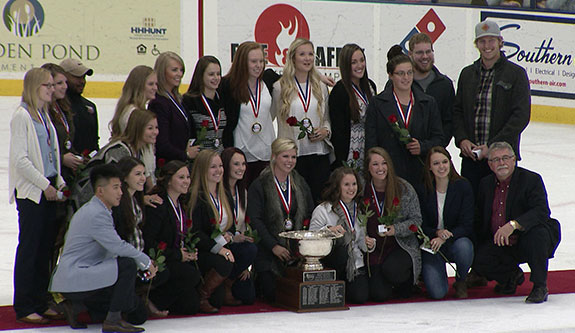