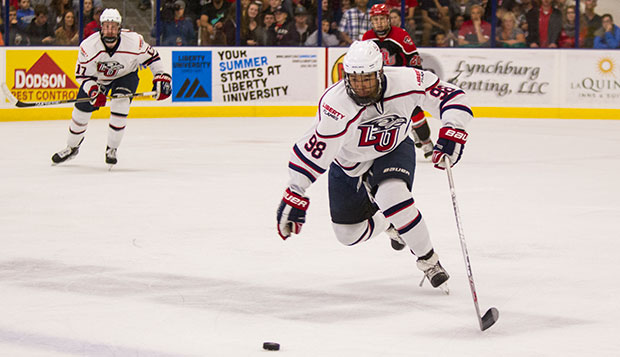 In a battle between the fifth- and sixth-ranked teams in this week's ACHA Division I poll, Liberty's ACHA Division I men's hockey team struggled to find a spark to fuel its offense for a second night in a row, allowing visiting Davenport to sweep the Flames, 6-3, Saturday afternoon before a Homecoming crowd at the LaHaye Ice Center.

The win clinched the Panthers' third Blue & Gray Cup in the four-year history of the best-of-three series, created to embrace the rivalry between the two schools and commemorate the 150th anniversary of the Civil War, where regiments from Michigan and Virginia fought on the same battlefield.

The game was scheduled for 3 p.m. to avoid conflicting with Liberty's football game at nearby Williams Stadium. It drew just over 2,000 fans to the renovated arena, which celebrated its grand re-opening in front of nearly 4,000 fans on Friday night.

Saturday's rematch started strikingly similar to Friday night's affair, with the Panthers (7-0-1) pouncing quickly to put the Flames' backs against the wall. Davenport struck first on their second shift when head captain Matt Ogden converted a putback of his own miss off the left pipe from deep in the left crease past graduate goalie Cary Byron just 1 minute, 35 seconds into the action.

Less than five and a half minutes later, the Panthers doubled their lead to 2-0 when forward Kody Polin capitalized on a power play with a shot from the right circle with 13:17 left in the first period.

The Flames (3-3-1) missed a golden opportunity to get right back in the game when they were unable to score on a five-on-three power play, as freshman Zane Schartz, who netted Liberty's only goal with a two-man advantage Friday night, managed the only shot in the more than a minute of five-on-three action.

That allowed the Panthers' defense to build momentum going in the second period, when, just like Friday night, the Flames were plagued by penalties and Davenport padded its lead with three more goals, the first by Jordan Simmonds on a short breakaway through the left circle, where he finished through the five-hole.

Then, as Liberty freshman defenseman Jackson Giammona was penalized for wrestling down a Panthers defender just left of the cage, Davenport defender Aaron Beally rocketed a slap shot from the high point that extended the lead to 4-0. The penalty put the Panthers back on the power play and they didn't waste much time before Kody Polin's shot from the right circle glanced off the glove of Byron into the back of the net for a 5-0 advantage.

"We were playing pretty well and they scored a couple goals and we took too many penalties again tonight," Handy said. "That's the big thing, penalties we can't afford to take."

The Flames finally got on the scoreboard with 1:35 left in the second stanza when senior forward and alternate captain Bram Erickson slid the puck through the five hole of former teammate Clayton Brown into the goal off assists from Schartz and Paul Lamoureux. That trimmed the deficit to 5-1 going into the third period, when freshman forward Jeff Wilson, cutting through traffic in front of the cage, deflected a shot rifled by Schartz from the top of the left circle past Brown.

"The line of (Eric) Masters, (Jeff) Wilson, and (Ray) Wilson played well tonight for us and that was really encouraging," Handy said. "We've got to have that push earlier on in the game."

Junior goalie Matt Pinel replaced Byron to start the third period and glove saved a shorthanded breakaway shot by Polin midway through, after the Flames misfired on a few power play shots. He then kept Liberty within striking distance by blocking a shot from up top on a Davenport power play.

Robert Ward set up the Flames' final score when he came out from behind the cage to control the puck on the left side and sent a centering pass to freshman forward Michal Bunn cutting through the right slot. His one-time finish with just over four minutes to play made it a two-goal game.

Liberty pulled Pinel for the last minute of play and Ogden put the finishing touches on the triumph with a diving stab at the puck into the empty net as he slid on the ice after being tripped up on a shorthanded breakaway for the final score with 39 seconds remaining.

"We'll have to rebound and we definitely will," Handy said. "We know we have the ability in the locker room. We're obviously not happy with the results this weekend, but we've got the fortitude and the ability in there to make things happen."

He said players must be accountable and take responsibility for their actions and performance on and off the ice.

"Guys need to embrace their roles and there has to be a little more concentrated effort, and more of a professional approach to what we're doing," Handy said. "That means if you have a bad shift, go out on the next one and change that. Let's not keep going downhill two or three shifts after that.

"We had a good meeting in there and I'm confident we can make some adjustments and get back on track," he added. "It's October, but, most importantly, we have to learn from what we're doing and we're going to do that."

The going doesn't get any easier for the Flames, who host Ohio (8-1-1), which dropped from No. 1 to No. 7 in this week's first computer rankings, next Friday and Saturday back at LaHaye, where the puck drops at 7 both nights.