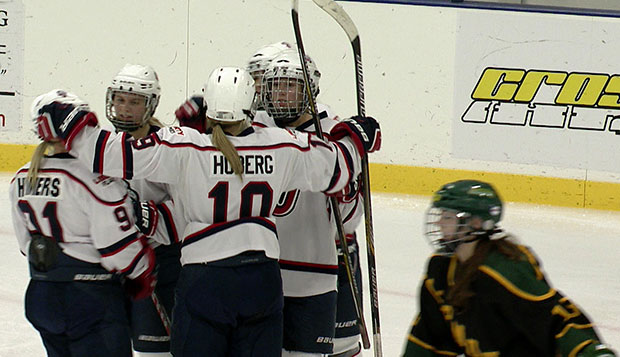 Liberty players celebrate one of their 15 goals over the weekend in a two-game sweep of Vermont at the LaHaye Ice Center.

Burrell started the scoring with 14:20 left in the first period before sending an outlet to Jickling who finished a backhand on the counterattack 10 minutes later to make it 2-0.

"Carrie's just, ‘Wow,'" Liberty Head Coach Paul Bloomfield said. "She takes it in stride and does a great job. When we were talking about giving the puck to somebody, I don't always want to give it to her, but she's the mainstay and she leads the team, as a good captain."

Katie Comeau assisted Jickling's second goal — a deflection a minute into the second period to put Liberty (4-1-1) up 3-0 — and played well around the Lady Flames' cage to help sophomore goalie Rosie Kelly post the shutout.

"Katie's a freshman on defense and we gave her the game puck," Bloomfield said. "She had some good moves. She's learning and I just felt she played really well and deserved some recognition. The defense played strong in front of Rosie, keeping the puck out of there."

He credited Vermont (0-8) for keeping the pressure on the Lady Flames, even though they never capitalized.

"Some of those girls are quick little skaters and they were scrambling hard to chase us," Bloomfield said. "We got a little sloppy at times, got it bogged down in our end and got called for some hooking penalties, which is just from being tired."

Liberty's offense found its second wind in the third period when sophomore forward Chelsey Greenwood scored off a short feed from graduate forward Nikki McCombe before Burrell netted her second goal from a tough angle and freshman forward Lauren McDonald tipped in a shot from the point by senior defenseman Brittany Hymers.

"That's a good home opener in the new rink in a new season," Bloomfield said. "We'll take it and come back (on Saturday)," when the Lady Flames and Catamounts faceoff in the rematch at 5:45 p.m.