Flames fall in front of record crowd for LaHaye re-opening 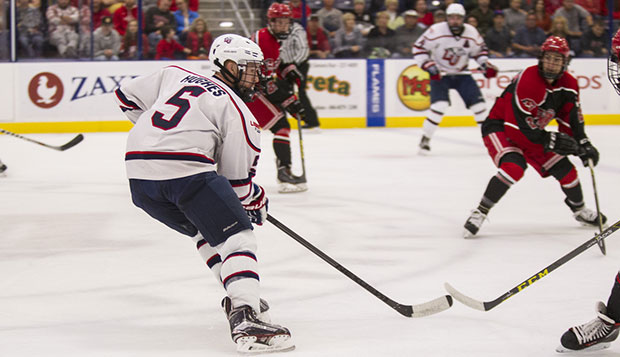 A spectacular night for the grand re-opening of the new and improved LaHaye Ice Center ended in a less-than-satisfying 4-1 setback for Liberty University's ACHA Division I men's hockey team in the first game against Davenport in the fourth annual best-of-three Blue & Gray Cup.

"That game atmosphere was awesome," Flames Head Coach Kirk Handy said. "It was amazing tonight. From a game standpoint, we weren't able to execute and them scoring on the second shift of the game set us back on our heels. Then in the second period, we ran into penalty problems and we had four minutes there where they scored three goals."

The fifth-ranked Panthers (6-0-1) jumped out to a 1-0 lead over sixth-ranked Liberty just over a minute after the opening faceoff when Winston Hofer pounced on a putback and finished past Flames sophomore goalie Josh Halpenny.

Liberty junior forward Grant Garvin, who paced the Flames (3-2-1) with five goals in their first five games, had his shot on transition glove saved by Davenport goalie Matt Kaludis before freshman forward Ray Wilson and junior forward Robert Ward had near misses on a fast-break follow and a backhanded shot through traffic, respectively.

Midway through the second, with Davenport on a power play, forward Luke McCarthy slipped the puck through the crease and into the back of the net for a 2-0 edge a split second before being flipped on a clean check behind the cage by Liberty defenseman Steven Bellew.

Moments later, Panthers forward and head captain Matt Ogden, stationed in front of the goal, tipped in a slap shot from the point by defenseman Cody Walsh, extending the advantage to 3-0. By the time defenseman Aaron Beally chipped a shot from in the right circle over the head of Halpenny and under the crossbar for a commanding 4-0 lead, Liberty's hopes of christening the renovated arena with a win diminished.

"The second period was tough," Handy said. "When we went down 4-0, it's tough to dig yourself out of a hole against a good team."

But the Flames didn't concede defeat and quickly capitalized on a five-on-three power play opportunity when freshman defenseman Zane Schartz buzzed a one-timer off a short assist from sophomore defenseman and head captain Ben Hughes past Kaludis top shelf for the final score with 17:23 remaining in regulation.

"Zane's been putting the puck in the net and playing well for us," Handy said. "We came to play in the third period, but you have to play 60 minutes. We didn't play 60 minutes tonight and we were unable to get the victory tonight. We will regroup and it will be a different game (Saturday)."

Davenport outshot Liberty 38-25 for the night and were whistled for just 10 penalties, compared to 13 for the Flames.

The two teams will gear up for Saturday's rematch at 3 p.m. back at the LaHaye Ice Center, when the Panthers could clinch their third Blue & Gray Cup in four years with another victory.

"We need a good start (Saturday)," Handy said. "We didn't have a good start tonight. We're going to move forward. We're excited about (Saturday) and we're diligent to come back with a way better effort."

Between the first and second periods of Saturday's contest, Liberty's ACHA DI women's hockey team will be honored for its 2014-15 national championship with a ring presentation on center ice.

First off, at 11 a.m., Liberty's men's program will host its annual alumni game with approximately 30 players reuniting for a Homecoming showdown as the Flames celebrate 30 years of hockey.