Flames set to Rock the Rink in home openers with Davenport 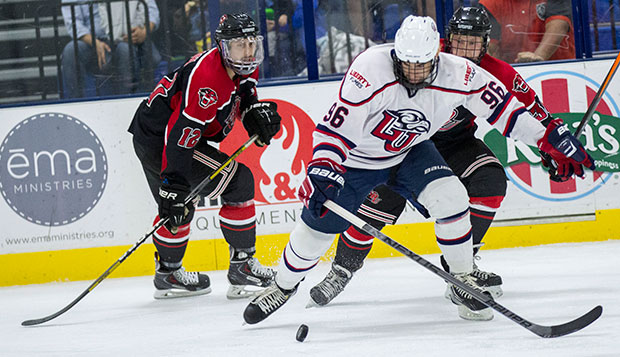 Liberty senior defenseman and alternate captain Steven Bellew battles for possession of the puck in the teams' last meeting in the old LaHaye Ice Center, Oct. 17, 2014.

It's a red-letter Homecoming weekend for Liberty University's ACHA Division I men's hockey team, with the Flames celebrating the grand re-opening of the vastly renovated and expanded LaHaye Ice Center with the first two games of the fourth annual best-of-three Blue & Gray Cup, a Civil War-themed series against Davenport — Friday at 7 p.m. and Saturday at 3 p.m.

"This will be a great weekend of hockey," Liberty Head Coach Kirk Handy said. "Davenport and Liberty have always had a great relationship and a great rivalry. Playing three games a year, now for the Blue & Gray Cup, adds a special element for us. We're excited for the matchup and we're looking forward to playing at home and the energy and excitement of playing in the renovated LaHaye Ice Center, which looks fantastic."

President Jerry Falwell, who has been instrumental in supporting the Club Sports program and hockey, in particular, over the past eight years, is expected to do the ceremonial puck drop before Friday's game.

"We're thankful to President Falwell and his wife, Becki, to provide a facility like that, as well as Darryl Glass from Glass & Associates (Inc.) for building it," Handy said, also expressing appreciation to Lee Beaumont, Liberty's senior vice president for auxiliary services; Charles Spence, senior vice president for construction planning; Alan Askew, construction coordinator; Dave Semenyna assistant director of Club Sports; and Mike Morrison, Club Sports' sponsorship and promotions manager, for "all the hard work over the past nine months" since the project was announced.

Now that computer rankings have gone into effect for the first time this season, both the Panthers (5-0-1) and Flames (3-1-1) moved up five spots to No. 5 and 6, respectively, in this week's ACHA Division I poll. Liberty is coming off two wins over Buffalo and Niagara, which both dropped out of the top 20 after last weekend's setbacks in New York. The Flames' only losses have come at new No. 1-ranked Minot State, with the second in a shootout.

Liberty and Davenport are dead-even (18-18-1) in a rivalry that started in 2005, when both were ACHA DII teams, but the Panthers have won two of the three Blue & Gray Cup series. Handy wants to see his team focus on improving its game and running its systems and let the results take care of themselves.

"From our standpoint, our goal is to continue to get better and stronger as a program," Handy said. "We're two months in and we like where we're at and where we're heading. We have a strong leadership group in there, led by our captains, and they understand we need to perform on the ice. We're just looking forward to an opportunity to continue the refining process on Friday and Saturday, to take the next step forward as a team."

Liberty scouting preview: The Flames have shown balanced attack so far this season, with five players contributing five points or more. Liberty is led by its three centers — junior Grant Garvin, who paces the team with five goals and has added one assist, senior alternate captain Danny Logan, who has distributed a team-high five assists and has netted goal, and junior Robert Ward (1G, 4A).

In net, sophomore Josh Halpenny and junior Matt Pinel were equally impressive in last Friday and Saturday nights' 3-1 wins at Buffalo and Niagara, respectively, making 31 and 28 saves. Pinel, making his first appearance of the season, maintained a shutout until the final nine seconds of regulation in a dominating performance against the Purple Eagles.

All-time series: Liberty is 18-18-1 against Davenport in a series that dates back to the 2005 ACHA DII National Championships.

Coaches: Handy is in his 16th season as the Flames' head coach and has compiled a record of 336-141-20. Phil Sweeney is 100-54-10 in his fifth season at the helm at Davenport after previously serving as an assistant on staff for six seasons.