LeBlanc makes the cut with SPHL's Huntsville (Ala.) Havoc 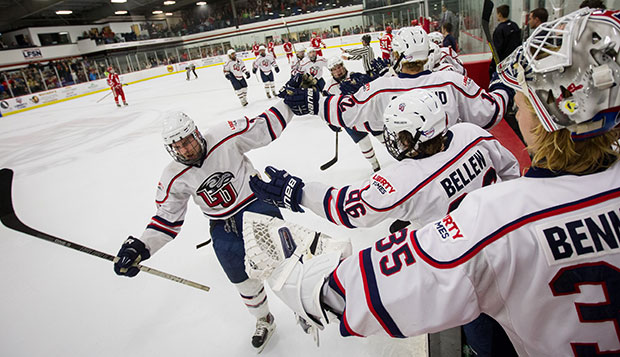 Lindsay LeBlanc (left) celebrates his second game-tying goal in the final minute of regulation in as many nights before later adding another score in a shootout win over Stony Brook, Nov. 15, 2013 at the LaHaye Ice Center.

A lifelong desire to play professional hockey came to fruition for former Liberty University ACHA Division I men's forward Lindsay LeBlanc on Wednesday afternoon, when he signed a one-year contract with the Huntsville (Ala.) Havoc, a Southern Professional Hockey League (SPHL) team.

"This has been my dream since I was a little kid," said LeBlanc, who secured one of 10 roster spots for forwards on an 18-man squad that includes six defensemen and two goalies. "I'm really fortunate, blessed, and I give God all the glory.

"I had to show up with an attitude that I had to compete every day, leaning on God when times were tough," he added. "I'm glad that my hard work has paid off and I earned my spot on the team, but today is just Day One. I've got to come to work hard every day and improve on and off the ice."

Huntsville, the single-A affiliate of the Nashville Predators, is one of nine teams in the league that will be joined by a team in Roanoke, Va., next season. The Havoc opens its 57-game season Friday night at the Columbus (Ga.) Cottonmouths, a team it played in an exhibition game last Friday on Huntsville's home ice at the Von Braun Center.

"We have probably one of the youngest teams in the SPHL, but we're all hungry and we've all bought into the system that Coach (Glenn) Detulleo has set in place," LeBlanc said. "We're going to be the hardest-working team in the league. Good things come to those who work hard. That's been my motto since I was a little kid."

He is one of the few players in the league coming from a club-level team.

"We have five or six guys who played NCAA Division I and one guy who was drafted by the St. Louis Blues," LeBlanc said. "When you get to this level, everybody can skate, shoot, and pass. It comes down to working hard and competing every day and that's what I plan to do."

The Havoc went on a team retreat this past weekend, designed to promote team building. LeBlanc said his experience at Liberty gave him a solid spiritual foundation and thanked Flames coaches Kirk Handy, Jeff Boettger, Dan Berthiaume, and Marc-Andre Bourdon for their mentorship and work in developing him as a player.

"I really grew as an individual, and accepted Christ at Liberty, which was the biggest decision of my life," LeBlanc said. "To God be all the glory and I'm ready to be a light down in Huntsville for Him."

He is living in Huntsville with two teammates, including Sean Poitras, who played college hockey in LeBlanc's hometown of Edmonton, Alberta, and Jordan Ruby, also a Christian and the all-time saves leader as a goalie at Rochester Institute of Technology, an NCAA Division I team.