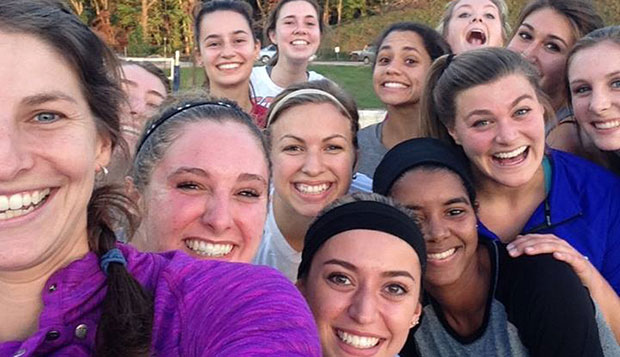 The fall semester is considered offseason for Liberty University's beach volleyball team, so Saturday's turnout of nine women's teams and four men's pairs was encouraging for its Fall Tournament on the four beach courts beyond the East Campus Intramural Fields.

"It was a fun tournament in a really relaxed atmosphere," Flames Head Coach Rachel Willis said. "We have a few returners, but for the most part, we have a very different team from last year with a large crop of freshmen coming in.  We've got a lot of work to do, but beach volleyball lends itself to quick improvement and my expectations are that we're still going to be a very strong team. Everybody's ready to learn and if they can get reps in the winter, that's going to help them before they step on the sand in March."

Also advancing to the semifinal round were returning players Emily Stotmeister, a junior who formerly played women's basketball, and Chis Santos, a graduate student from the Dominican Republic. They tied for third place with Samantha Evans and Elissa Mulcahy, who played for the Lady Flames two years ago.

Though none of the current men's beach players were on hand, the men's indoor team was represented by sophomore T.J. Forsythe and senior Tim Jacobsen, who finished runner-up to former men's lacrosse player Kurt Tobias who teamed up with Zach Riley in a best-of-three final to 21.

"Coach Mike Morrison and I are planning another tryout in the spring, when the men's indoor team will be winding down and players will have a better idea of whether they will be committing to the summer," Willis said.

Liberty's players will take a couple weeks off before beginning weight lifting and conditioning in November, which they will continue through the winter.