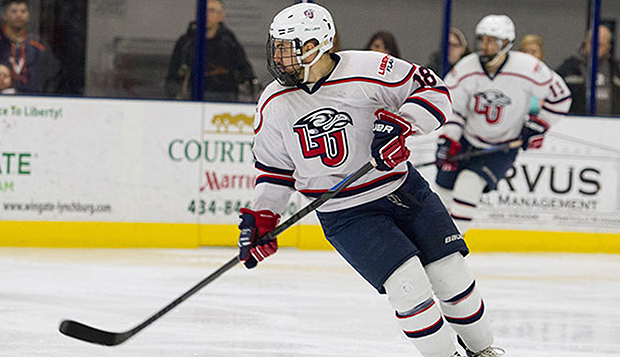 Liberty senior forward Kyle Garcia skates in a game last season at the LaHaye Ice Center, where the Flames will play their home opener next Friday night.

Consecutive road wins against two teams ranked in the top 20 made for a much more enjoyable return trip to Lynchburg for Liberty University ACHA Division I men's hockey Head Coach Kirk Handy and the 11th-ranked Flames.

"I was a lot happier with our effort tonight," Handy said after Saturday night's 3-1 victory over 14th-ranked Niagara at Dwyer Arena, comparing it to Friday night's 3-1 triumph at No. 16 Buffalo, two weeks after being swept at then-No. 3 Minot State. "We took a huge step forward from last night. We're still not where we need to be, but we really had a better focus and we definitely played a better game tonight and it was evident from the first shift of the game all the way through. We had a lot of guys step up and get in the lineup. It was a team effort tonight."

"It was a fantastic play," Handy said. "He put a great move on the goalie. The line of Kyle Garcia, Steele, and Bram Erickson were able to execute for us very effectively tonight."

Grant Garvin netted his fifth goal of the season for Liberty (3-1-1), assisted by fellow junior forward Robert Ward, who capped the Flames' scoring on a rebound with the Flames on a power play early in the third period.

"Mike Bunn had the initial shot and it looked like it went off the post and Robert put it right in," Handy said.

But the star of the game for the Flames was junior goalie Matt Pinel, who made 28 saves and had a shutout going until the final nine seconds of the third period, when the Purple Eagles (4-5) finally scored.

"Matt Pinel played a fantastic game tonight," Handy said. "Matt was unbelievable. He made some great saves. He was a stabilizing factor on the back line tonight. He played really well."

After starting the season with five away games, Liberty is looking forward to its home openers over Homecoming Weekend, next Friday and Saturday nights against Davenport. The grand re-opening of the renovated and expanded LaHaye Ice Center will include the first two games of the best-of-three Blue & Gray Cup.

"Now, heading home is a big thing for us," Handy said. "We've been on the road a lot lately, so to play the next four weeks at home is huge for us. We're definitely looking forward to next weekend. Davenport's one of our big rivals. But we're most looking forward to seeing our team progress. We know it's going to be a process. Our focus is on our group of guys and we're definitely excited about this team moving forward."