Flames go 3-0, tinker with lineup at tourney (with video) 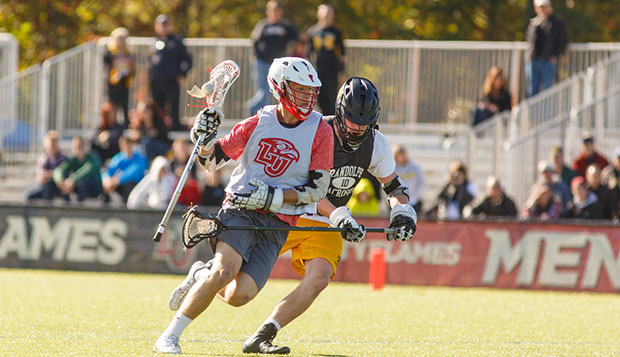 In terms of wins and losses, Liberty University's men's lacrosse team's Fall Tournament was an unqualified success, with the Flames sweeping Randolph College (8-4), George Washington University (9-0), and the University of Richmond (10-2), Saturday at the Liberty Lacrosse Complex.

"Every year, we run this thing as an opportunity to knock some of the rust off and play somebody else other than our own guys," he said. "Although the games are shortened, it's a lot of lacrosse in one day. It was great weather, which is always a bonus, and we got three wins, which is icing on the cake."

He and his coaching staff used the three-game tournament, with two 25-minute running halves per match, to implement new plays and rotate in the Flames' 15 new players.

"We were able to get everybody in," McQuillan said. "We used all three midfield lines (and) both lines of attackmen. The depth has definitely increased from last year. There's still a bit of a learning curve. But compared to last year, we're definitely weeks ahead of where we were. That's a testament to a lot of the freshmen who have come in have picked things up really well and really quickly. Monday, we'll release a new depth chart based on some of the things we saw out here today."

He particularly liked the variety of competition that participated in this year's event, with Randolph being an NCAA Division III program, GWU an SELC Division I Northwest Region rival, and Richmond competing in the National Collegiate Lacrosse League. That diversity allowed the Flames to experiment with different defensive strategies and modes of attack.

McQuillan said the tournament was a particularly good chance to assess the Flames' two freshmen goalies — Brayden Harriman and Matt Nichols — who will be vying for the starting spot after three-year starter Ethan Kamholtz graduated. They each played one half in all three games.

"Goaltending was definitely a plus for us today," McQuillan said. "Matt and Brayden are coming in and they're going to play a pretty important role and they're going to spend the rest of the fall continuing to fight for that starting position because we haven't made a decision on that. We gave them equal opportunity today and I thought they did really well. They stepped in and we had one shutout, two goals in the third game and four in the other, so overall, we let six goals in."

"Randolph was a good test for us," said Nichols, who allowed three goals to the WildCats before shutting out the Colonials and Spiders. "They came out firing and made us play as hard as we could."

Offensively and defensively, the Flames exceled, but still have plenty of room for improvement.

"The defense played well, played aggressive and minimized the points against," he added. "Some of our slide packages seemed a little bit slow and our rides and our clears, there were definitely some gaps. That's the reason, we're trying to figure out where those holes are in fall ball so we can fill them by the time the spring season starts."

Next up, the Flames will play a friendly in the annual Alumni vs. Varsity game, set for Friday at 6 p.m. on the Liberty Lacrosse Fields.

"I think it will be the most competitive alumni game to date," McQuillan said. "I usually spot the alumni team two points for every goal and I don't think I'll have to do that this year. I don't want to lose and I'm going to make them earn it this year. I'm not going to give them any breaks."

Besides Kamholtz in goal, the alumni team will feature recent graduates Chris Armstrong and Joe Gargiulo on attack, Miguel Lozada at midfield, and Nate Lowmaster on defense.

"Those are just the guys that I have coached," McQuillan said, noting close to 30 alumni have signed up. "We're looking forward to seeing a lot of familiar faces. It won't be as intense as some of the other games we've got on our schedule. It'll be really relaxed; It will be a fun atmosphere and I'll make sure of that as I'm reffing the game."